A new competitor in the city car class has (now) been introduced.

With prices starting at £7,995, the new Vauxhall Viva is by far the cheapest Vauxhall on the market and also one of the cheapest alternatives to the Skoda Citigo, Peugeot 108 and Suzuki Celerio. 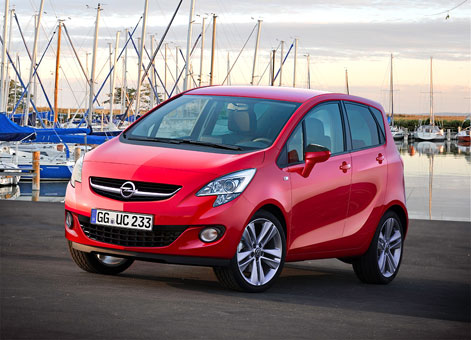 A small car is easy and handy to live with - especially when it comes to parking it. The city/mini car has a lot of potential - for starters because of the size - it is the perfect car for singles, students who need a car, but also as car number two in the family. It is convenient when dropping the kids off to school or going grocery shopping.

Best city car - from VW UP! To Vauxhall Viva
The title as best new low-cost car (city car) on the market has, since 2011, belonged to the VW Up! - However, since 2014 with keen competition from the new Kia Picanto (facelifted version), which for many motoring journalists is the best city car in the least expensive category.

VW Up! and the identical twin models Seat Mii and Skoda Citigo are available in two versions of the same 1.0 litre 3 cylindered petrol engine with 60 hp and 75 hp respectively.

The cheapest version of the new Vauxhall Viva defeats all competitors with standard 75 hp from a modern 3-cylinder 1.0 litre Ecotec engine with eminent fuel efficiency. 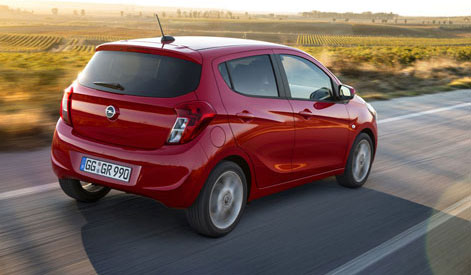 The new Vauxhall Viva as seen from behind.

New Vauxhall Viva test - facts and figures
Motoring journalists are not easily impressed by a low-cost product from South Korea (GM Korea), which is based on the outgoing Chevrolet Spark, from which 1/3 of the parts have their origin.

But after all, that does not change that Vauxhalls Viva as a rental car is a great choice. Watch test of Vauxhall Viva in the video underneath

For more Vauxhall Viva facts and figures, please see below

The engine is made from aluminium, which contributes to keeping the weight at a minimum. Automatic transmission is not an option and you can choose any engine you like - as long as it is the 1.0 with 75 hp.

A lightweight car can make do with modest torque without seeming to lose its edge, but as soon as it is loaded with heavy luggage(s) (or heavy passengers) it will appear quite slow when accelerating.

Watch an English review of Vauxhall Viva below

The first English versions of the Vauxhall Viva (RHD-version) have apparently been produced with a ‘bunny hop’ clutch. Hopefully it will be fixed soon. Watch the more critical test on Vauxhall Viva:

Evaluation Vauxhall Viva car hire
Vauxhall Viva is among the most spacious (for passengers) and most fuel efficient cars in its class.

It is not possible to fit more than one large suitcase into the boot of the car, but that is the case for all city cars for rent. Vauxhall Viva does have a disadvantage with only 206 litres of luggage capacity, which is a bit less than the competitors.

If luggage space is a priority, it is better to take a larger car into consideration, but it is possible to fit in luggage for three people on a one-week vacation.

Have a closer look at the boot of a Vauxhall Viva

In comparison, the VW Up! has a 251 litre trunk without folding the back seats. With the seats folded, it has 959 litre luggage space. A standard boot in a Fiat Panda is also larger with 225 litres.

The performance-minded motorist will not find the new Vauxhall Viva/Opel Karl entertaining on country roads, but most drivers will not be missing anything. The engine is, however, too weak to maintain high speed on the motorway over long distances.

It is, on the other hand, a delight to drive the Vauxhall in the city and on short routes from the airport to the holiday flat, to the beach or for sightseeing. Vauxhall Viva is perfectly suited for short drives, with a comfortable driver’s seat - even for tall drivers. In addition to this, the Viva is very easy to park, and last, but not least; the new Vauxhall Viva comes with a ‘city function’ as standard equipment that makes the power steering even lighter.

Spacious mini car/city car for rent at Avis, Hertz, Europcar etc.
As from late 2015, it will be possible to book the new Vauxhall Viva rental car at a number of car hire companies.

For tourists, the new Vauxhall Viva is the most perfect and often cheapest rental car in the popular ‘city car’ category - partly because it has more space, than the competitors (apart from in the boot) and partly because many VW Up rental cars only have 3 doors and often just 60 hp. Standard equipment in the cheapest version of the Vauxhall is also better than in Volkswagens mini car.

There is no doubt; the Vauxhall Viva will be very popular. Many car rental companies in Southern Europe are looking for an attractive replacement - in terms of price - for the aging Fiat Panda and VW Up models that, most likely, still will be available at a lot of car hire firms.

Especially car rental companies like Hertz, Avis, Europcar, Sixt and Enterprise would be happy that Vauxhall Viva comes with 5 doors as standard - without additional charge. 5 doors are also standard in Fiat Panda, but not in the VW Up!

The low price on Vauxhall Viva is also contributing to its popularity. In most countries it will sell for under £7,500.

Opel has a reputation for dependability and low-cost maintenance, which is yet another advantage for the car hire companies and quite a lot have already had success with Vauxhall Vivas cousin: the small and charming Vauxhall Adam, which was introduced in 2013 and features the same engine as the Vauxhall Viva.

Typically, it is not possible to book a particular car model when renting a car - unless it is specified in the offer. Very often Malaga or Tenerife car hire companies will have two to three models to choose from in the cheapest class, and when arriving at the front desk you will from time to time be asked, which of the available vehicles, you prefer.

If possible, the Vauxhall Viva is a very good choice in the city car rental class - especially, if you are travelling more than two people. Many will prefer a Fiat 500 for instance, if only needing two seats

Vauxhall Viva has the following data: