The Suzuki Swift is an increasingly popular rental car in the economy class also known as the 'Ford Fiesta class' of car rental.

With the Suzuki Swift you get a reliable and well put together car which is pleasant to the eye and surprisingly fun to drive - this car is entertaining almost on Mini level. 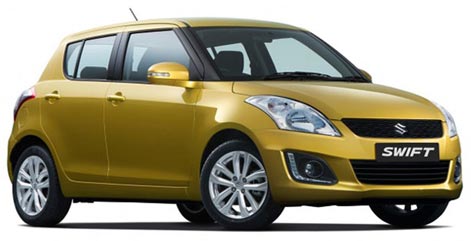 The Suzuki Swift will seat 4 grown-ups in comfort and easily 5 people if one is a child or 2 of the adults are not taking up a lot of space. Virtually all rental car Suzuki Swift come in the 5 door version which makes the car very family friendly.

Luggage space is acceptable with 211 liters or up to 528 liters with the rear seats folded. Safety is good with 7 airbags and the car was tested to a top notch 5 Star euro NCAP crash rating.

What maybe will amaze rental car customers the most is the Swift's extremely good fuel economy. With the new 1,2 liter 90 brake horse power engine, the Swift is quick of the mark and even extended motorway driving at speed now comes natural for this little gem of a car.

Competitors to Suzuki Swift - supermini car hire
Competition is fierce in this segment of cars which is also referred to as the super-mini car hire class.

This is where you as a car manufacturer can obtain large sales volume without selling your product on the cheap. If a car model in the supermini class is popular, it is possible as a manufacturer to generate healthy profits.

Amongst the leading models per 2014/2015 are VW Polo, Renault Clio and of course the Ford Fiesta.

For rental purposes, the Hyundai i20, the Nissan Micra and the Citroen C3 are increasingly popular choices due to very competitive pricing.

Suzuki Swift 2010 model timeline - facelift and better engine from 2013/2014
The first of the truly modern Suzuki Swift models was introduced in 2004 as the 'second generation Swift’.

Production of the Swift for 2nd generation was moved from Japan to Hungary in order to avoid expensive EC import tax and to gain the advantage of lower production cost for the brand new model. The Suzuki Swift marketing campaign included Portuguese celebrity footballer Cristiano Ronaldo driving the new and groundbreaking 2004 Suzuki Swift.

The car became a tremendous success and lifted the Suzuki brand awareness for small economical cars in virtually all countries in Europe.

Enter 2010 with the introduction of the new model Suzuki Swift - also referred to as generation 3.

The 2010 Swift model was a careful re-do of the proven formula. Suzuki kept the easy to recognize facia and compact form, but increased interior space and upgraded and refined on technical solutions.

Late 2013, the Suzuki Swift generation three got a facelift and an engine upgrade. The already attractive model was, again, up there in the supermini ranks on par with the best of what competitors could offer. 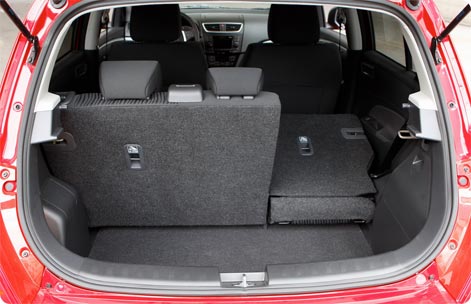 The Suzuki Swift 2014 model is a very accomplished car that may only be let slightly down by the size of the boot which is only average for this rental class.