BMW’s new 5-series launch in spring 2017 marks the introduction of the 7th generation of the middle range Beamer.

With this version, the BMW-5 goes further upmarket in an attempt to topple the increasingly popular Mercedes E-class and Audi A6 main competitors.

In BMW language the new 4-door 5’er is the G30 model, which replaces the outgoing F10 model.

This looks like an expensive car! - is it a 7-series?
For the untrained eye, the new BMW 5-series looks is very similar to the 7-series; a much more expensive vehicle. This is, obviously, not a coincidence. BMW wants their new-born to be slightly more exclusive.

The length of the car has increased slightly from 4,90 to 4,935 meters (the new G30 is exactly 36 mm longer than the old F10). More importantly, the car is a couple of centimetres wider and the overall weight of the vehicle has been reduced by up to 100 kilos.

A not so advertised fact is that the new 5-series from 2017-forward is actually based on the modular platform of the 7-series, which, by no means, is a bad thing; except when repairs start to be a common nuisance of 2nd hand BMW ownership (the F10 model especially). The more expensive the platform, the more costly even small niggles are to fix.

The car rental favourite 2017-2018 version will be the fuel-efficient BMW 520d (diesel). When restrictions on city driving in Europe with diesel fuel is introduced, demand for petrol cars is expected to increase and the petrol version BMW 520 (and later the petrol BMW 518) will be the most common prestige BMW on the parking lots of business favourite rent-a-car suppliers like Avis, Hertz, Sixt and Europcar.

How does it drive?
The new 5’er is every-bit the class act driving machine expected by customers. If anything, it holds a more composed stance on the road, even if pressed to its limits.

On the flip-side, handling is less involving from a driver’s perspective. Increasing the size of the vehicle, furthermore, has made it more of a limo and less of a sports car.

It is, however, possible to shove the new BMW 5-series round corners at an incredible speed without killing yourself due to all the electronic gadgetry that will cut out excessive use of power, help reign in the rear of the car and even work as ‘eyes’ for possible obstacles.

Has the 5-series lost its edge?
The BMW 5-series cars driving experience is better than ever before, and handling is less of a selling point nowadays in the competitive middle size up-market class of cars.

For most BMW drivers, the sporty feeling of the 5-series, of course, is important. However, customers prefer the image of being on the forefront of technical development and they also appreciate the Bavarian (German) efficiency. 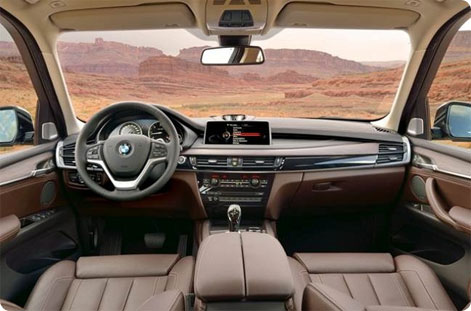 The outgoing model F10 (sedan)/F11 (estate) was never meant to be a truly sporty car either, and it reflects the approach to driving amongst core BMW 5-series customer age group from 30-somethings to 60-somethings. This is business car leasing territory aiming at upper-middle managers in big companies - or director/owners of smaller companies.

Cornering ability is important, but comfort and safety - and of course space for the family and plenty of electronic gadgets are very high on the list of priorities too.

Every BMW-driver still likes to be able to easily push past lesser able cars on the motorway, hence all new BMW 5-series cars come with an absolute abundance of torque; in the 520d there are about 400 Nm of them. Touch the accelerator and the car goes like ‘A Bat Out Of Hell’ - until electronic safety measures restrict that kind of foolish behaviour.

The new 5-series is a class act in terms of projecting image. No car does this better for the money - not even the new and very capable Merc E-class, which has its image of ’car for the old (half)rich man smoking a cigar’ slightly against it. Ambitious women are more likely to choose the new BMW over the Merc for the same reason.

When driving a BMW, you are showing the world that you move quicker than your peers in terms of career possibilities and salary. On top of that, there is something youthful about BMW and Audi - compared to the conservative old-hat Mercedes brand.

Very important for the typical BMW buyer is, therefore, to switch to the new model as quickly as possible - not wanting to be seen as falling behind, like Mercedes owners frequently do (and don’t care about) - let alone, the BMW owner will never ever want to be seen in any model older than the previous model. This and the abundant supply of second hand 5-series cars is the reason why the values of ‘old’ 4-door 5-series cars and even 5-series estates BM’s drop like stones.

Which one is best? - Mercedes-E or BMW 5-series.