For many, the ideal holiday is crossing the Nevada desert from California to Las Vegas in an American convertible or driving from Florida Key West to Houston, Texas.

For those who are hungry for more, the ultimate USA road trip is, of course, to cross the country starting in California driving east towards Florida and subsequently heading north to New York State. The most popular convertible for road trips in America is the most recent version of the Ford Mustang with room for 4 people.

Ford Mustang was the brainchild of former Ford CEO Lee Iacocca who wanted Ford to build a car targeted on the youngest generation of US motorists. In the mid sixties the American economy was developing at a speed which by far outpaced the economy of Europe.

The increasing American wealth combined with low retail price and cool looks of the Ford Mustang, meant that many were bought by parents in order for their teenagers (often the Mustang Convertible) to have their own means of transportation – in many cases the Mustang was the second or third car of the household.

Even today, the latest version Lee Iacocca’s icon is “build-to-cost”, which means that material and development costs on Mustang are kept to a bare minimum in order to maintain affordability for its target audience.

An example of keeping the expenses at a minimum is the solid rear axle which is derived from the 1960’s version of the Mustang. Despite the Mustang’s sporty looks this type of suspension, which interconnects the rear wheels, is not adequate for fast driving in sharp bends. When driving the heavy Mustang convertible on the edge, suddenly losing the rear end in a corner will for most unprofessional drivers be difficult to recover from.

With that said, handling and ride of a Mustang is by no means worse than most other American cars and for the purpose of cruising down the American highways where there aren’t a lot of bends, the Ford Mustang rental car is more than adequate for the job.

The Ford Mustang is an “American Mini”
Even though the Mustang initially was targeted towards the younger segment of buyers, it has achieved a much broader appeal. The success of the most recent Mustang resembles those of the New VW Beetle and the New Mini Cooper. Nostalgic looks in a new cool contemporary package is guaranteed to appeal to both men and women as well as young and old. Furthermore, all of the above manufacturers make their cars as convertibles as well and as two and three door models, all at relatively affordable prices.

These contemporary classics are practical, desired and accessible to most classes of society, which means that a car like the Ford Mustang is equally accepted in front of a hotel at an A-list reception as it would be at a ¼ Mile run track day.

Variations of the Mustang Convertible
The most common version of the Ford Mustang in both USA and Europe is the V8.

However, in the states the hire car versions of the Mustang Convertible mostly make do with Fords V6 block. Prior to the revised Ford Mustang 2011 version (2005-2010 hire cars) the convertible would have the slightly dated Ford 4.0 V6 engine with 200-210 bhp. As a hire car the 2005-2010 Mustang delivered plenty of torque but due to the heavy cast iron engine block and automatic transmission, they were no rocket ships – 0-62 MPH in around 10 seconds.

In early 2011 a far more powerful Ford Mustang V6 convertible was introduced which is now also available as hire car in America. Thanks to a new and far more advanced 3.7 V6 light weight engine with variable camshaft timing and 24 valves the Mustang now develops 305 bhp.

Even though there are around 100 BHP more on tap the engine emissions has been reduced significantly, which means that the Mustang is now one of the most fuel efficient cars in its class, providing that the driver’s right foot isn’t too heavy.

Car hire USA – Ford Mustang Convertible the fastest hire car without a roof
Please note that despite of the most recent Ford Mustang’s modern engine technology it is by no means a race car. The build of the car and not least the overly conservative rear suspension are all contributors to this fact.

On a track most everyday BMW 3-series straight six convertibles would leave the American pony-car in the dust given that the straight isn’t too long.

In comparison to real roadsters such as the BMW Z4, Porsche Boxster and Lotus Elise the track handling of the Mustang would seem even more hopeless. However, the point of the Mustang convertible isn’t screeching through corners and winning track days.

If you want to cruise down the highway in a large yet very stylish convertible, with the brilliant sound track of a “beefy” V6, it doesn’t come cheaper than the Mustang. The reason being that retail list price for a new 2011 Ford Mustang Convertible is only around 27,000 US Dollars.

Taking the generous space for 4 adults into the equation, Ford Mustang convertible is almost in a league of its own, where the only contender might be the Chevrolet Camaro convertible, which is seen as Mustang’s biggest competitor on the American market.

New and spacious Mustang Convertible
You can almost be certain that a convertible hire car in USA have room for 4 adults.

Luggage space in Ford Mustang Convertible
A Ford Mustang Convertible hire car in The States is generously proportioned for four adults and some travel luggage. The boot will swallow approximately 300 litres, which is the equivalent of the new Fiesta. In practical terms this translates into 3-4 pieces of standard sized cabin luggage.

Even though the boot in the Mustang is fairly large for a convertible, ideally try to avoid hard shell luggage as these are not always a good combination for the slightly oddly shaped convertible boot. Rucksacks and sports bags can more easily be crammed into place.

Here is a post regarding luggage on Mustang Owners Club Great Britain where it is illustrated that multiple large hard shell suitcases are not a good match for the Mustang convertible boot.

USA Convertible car hire – Facts about hire cars in the convertible group
Regardless, if you pre book a Ford Mustang convertible for the USA road trip, you are never 100% guaranteed to get a Mustang upon collection of the car.

The car hire company always reserves the right to provide a similar type of car in the same class (convertible) from another car make. In America the Chrysler Sebring convertible, Toyota Solara convertible or Chevrolet Camaro convertible would be a typical alternative to the Mustang.

Below here is a picture of a happy customer who booked a Ford Mustang Convertible hire car through our website to do a road trip in Florida. 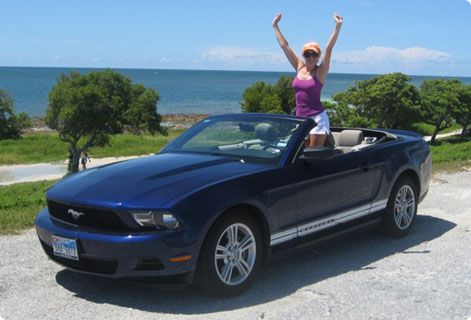