The first version of the Ford S-Max (2006-2014) turned out to be the best driving 7-seater MPV-minivan throughout its life; quite an accomplishment with competitors like the VW Sharan and the Renault Espace.

In fact, even the new 2015 model S-Max from Ford cannot match the previous S-Max for driver’s joy and sporty feeling.

Some will say it is a pity that the new Ford S-Max 7-seater is less of a sporty vehicle, but most families will appreciate the more ‘grown-up’ car with safe and stable handling. If you want to, the Ford S-Max MPV still delivers a decent amount of cornering ability. As most family cars go, however, being a sharp handling beast is not the first priority of a minivan. 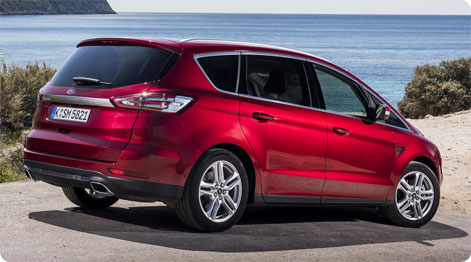 The refined choice - Ford S-Max rental car
The new Ford S-Max is still a large car, but in the new edition, refinement has been the goal and Ford has achieved just that - a highly accomplished 7-seater minivan built in quality materials and with a considerable attention to detail.

The S-Max always has 7 seats (except for the cost saving Trend versions sold only in certain markets). For car hire purposes, you will rarely find a 5-seater Ford S-Max, but if the offer says only 5 seats and you need transport for 6 or 7 passengers including driver, be sure to choose another rental vehicle offer.

Rental cars with 7 seats and lots of space
The new Ford S-Max is very spacious and measuring 4.80 meters, it has about the same lenght as the previous model. 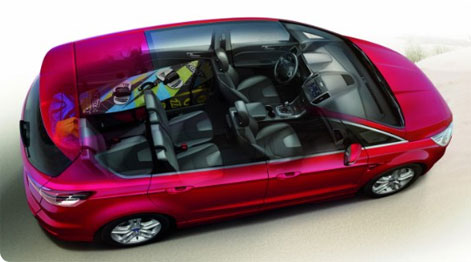 Snowboard gear in the Ford S-Max and still room for 5.

It is difficult, however, to fit above average grown-ups comfortably into the last row of seats.

On short trips, they will be fine, but larger minivan rental cars such as the VW Sharan, Seat Alhambra, Chrysler Voyager, Renault Espace or the S-Max twin Ford Galaxy are all more generous with space carrying 7 people.

Perhaps the most important drawback when using all 7 seats in the Ford S-Max minivan is that luggage capacity is reduced to 285 liters. It is still quite a decent size of boot equal to that of a Ford Fiesta, but 7 passengers often bring more luggage than 5 or 6 people do.

The full seating capacity of the MPV rental car from Ford (S-Max 2015-forward).

If you hire the Ford S-Max MPV car, in the luggage compartment you will find a 12V power outlet in a panel which also contains buttons for operating the clever folding seat arrangement. You can choose seating arrangement for 2, 3, 4, 5, 6 or 7 people virtually by the press of a button.

As you can see in the video presentation below, the new S-Max is very versitile indeed, and driving with only 5 seats available will leave a huge space for luggage - a total of 700 liters. If you fold flat one more seat row leaving room for only the driver and front passenger, the Ford MPV rental car turns into a delivery van with 2200 liters of space at your disposal. And since both rows of seats fold flat, it is easy to arrange larger cargo items like bikes or even large furniture in the immense boot space.

A walk round the new MPV bestseller from Ford.

A new standard of MPV car hire - luxury level
If you are used to driving the old S-Max, the new version will come as a pleasant surprise with much improved noise level and a saloon-car feeling at the dashboard.

The modest Ford minivan seven-seater is now a class act on par with entry level BMW or Mercedes cars. 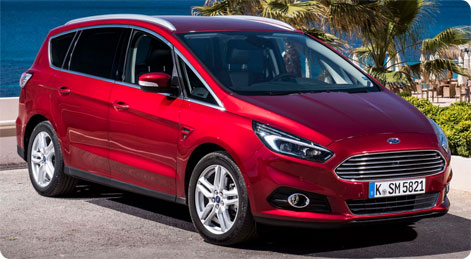 Some Smax rental cars in the MPV class will come with standard GPS, but for most hire car companies, the navigation system is still optional at the rental counter.

The new Ford S-max has a range of standard technical goodies to offer as for instance the 8 inch touch screen, parking sensors (standard in most markets), keyless start, electric hand brake and the hands-free electric tailgate opener, which operates like magic by swiping your foot under the rear of the vehicle.

Engines - mostly diesels (which are the best)
Despite the ’VW Diesel-Gate’ occurence and the increased awareness of the drawbacks of the diesel engine when it comes to polution, most Ford S-Max cars for rent will be diesel vehicles.

The engine of choice is the 2,0 litre diesel with either 120 or 150 bhp. Some rental companies may decide to venture into purchasing Ford Smax cars equipped with the new gasoline 1,5 litre Ecoboost SCTi unit with 160 bhp.

With the size and weight of the car, the diesel engines, generally, perform better and are more frugal as well.

Expect around 56 miles to the gallon with the diesels, and some 44 mpg with the most frugal SCTi petrol engine. The numbers equal 5 litres of diesel per 100 km (20 km per liter) and some 6,5 average liters of petrol per 100 km (almost 16 km per liter petrol).

You can order a range of more powerful diesel and petrol engines, but for car hire use, the above will dominate the market. The much acclaimed Ford Powershift option (auto gear box) is available from the diesel 150 bhp version and upwards. This particular version of the S-Max will no doubt be available for rent at many locations - with an extra charge for the auto option.

Where can you rent the S-Max?
The larger rental fleet cars tend to stay longer in service than the usual 1-2 years or even less, which has become the norm for replacing smaller and medium sized cars with the major suppliers like Avis, Sixt, Europcar, Hertz or Enterprise.

During 2016, the first batches of new S-Max cars should be available for hire in most countries in Europe.

Since the main competitors VW Sharan/Seat Alhambra are getting on a bit (introduced in 2010), unless the hire car providers receive incredibly advantageous offers for VW Sharan or Seat Alhambra from the Volkswagen Group (which could happen in the light of the VW crisis), most car hire companies will play it safe and go with the new Ford minivans such as the S-Max or Galaxy. In other words: Ford has a minivan-winner on its hands and will no doubt receive plenty of rent-a-car orders.

As the Galaxy is more expensive and only a slightly larger car, the Ford S-Max will be a very common MPV car hire offer from most companies in the UK and in Europe.