Ford Fiesta as a rental car - the supermini class leader

In 2013, Ford introduced the gently redesigned version of one of its most important models: the Ford Fiesta.

The previous 2008-2012 year of production Fiesta had already proved itself as one of the most reliable and fun to drive vehicles in the important small car economy segment above the city-car class.

Ford’s new Fiesta model introduced in late 2012 was even better and featured a more upmarket front design with the new corporate Ford fascia not so unlike that of the iconic Aston Martin cars. 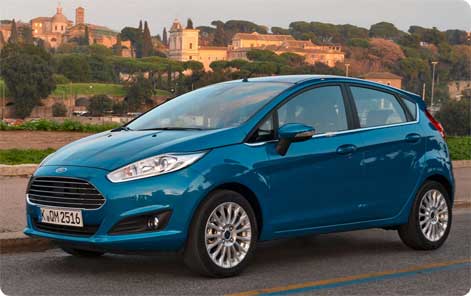 British car buyers have noticed the charming Ford supermini. Since its arrival in its newest incarnation, the Ford Fiesta has secured first place in the Top-10 car new sales statistics in the UK two years in a row in 2014 and 2015.

Competition in this class is fierce and the manufacturers are doing everything they can in terms of price, equipment, warranty and finance deals to get your custom.

The Fiesta wins with the following characteristics:

Once you get to know it, this small Ford turns out to be super practical and enjoyable.

Does the car look ‘bloated’ because of the designers aiming for interior space? – No, it doesn’t! – it looks the part of being a sharp small car with some attitude. 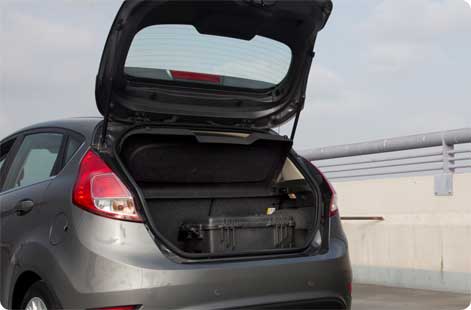 From time to time, driving the Fiesta as a hire car, you probably wish that you had a bit more power, as the car really invites to spirited driving. Most rental car Ford Fiesta’s will feature the 1.0 litre 80 bhp petrol engine – which is usually perfectly adequate, but turns out to be slightly under-powered with 4-5 people on board with luggage.

This car with the Ecoboost engine, however, will not feel slow like a Fiat Panda or sluggish like the Opel Corsa rental cars with the most basic engine, and as a bonus, in most cases, you will still be able to obtain excellent miles per gallon figures in the Fiesta.

In the supermini class, Find-Cheap-Car-Hire.co.uk recommends Ford Fiesta, Opel Corsa or VW Polo. The VW Polo rental cars available in Southern Europe will often be diesels – which used to be a great advantage. 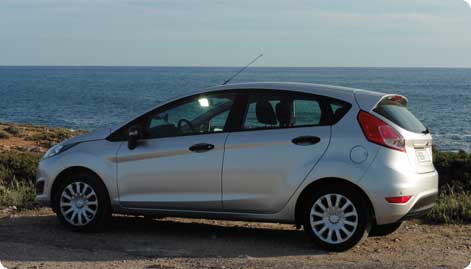 Apart from polluting much less, petrol engines have caught up tremendously since about year 2014, and unless you plan to do a lot of mountain driving (where the diesel option is much better), you probably will be better off choosing the Ford Fiesta.

Facts and figures – the Ford Fiesta rental car
The Fiesta rental car comes with the 80 bhp 1.0 Ecoboost engine and as a cheaper alternative for the rental fleet owners, it is also offered with the old 1.25 litre 4 cylinder engine with either 60 or 82 bhp. The old Duratec engine is almost entirely on offer in the UK as the taxation of cars in mainland Europe makes it less advantageous to buy old technology in terms of fuel consumption and pollution.

Most Ford Fiesta hire cars are manual cars, but offers for a supermini/economy rental car with automatic option, at some rental companies, will include the rather powerful Ford Fiesta Ecoboost 1.0T 100 bhp with Ford Powershift ‘double-gearbox’.

All Ford Fiesta cars will hold 42 litres of fuel. The weight of the vehicle in the 5-door version is between 1,050 and 1,100 kilos; the Duratec engine equipped cars being the slightly heavier.

Dimensions of the Ford Fiesta:

The new Ford Fiesta is easy to fit in a tight parking space with a length of only 3.97 meters. To illustrate its size, the 5-door Mini is slightly longer, quite a bit wider, but the Fiesta towers over the Mini with an additional 3 to 6 centimetres height depending on version. The relatively high driving position makes for good visibility when in the city.

Just 99 g/co2 per kilometre is achieved by the Ecoboost 80 bhp engine. Less impressive are the old Duratec Ford Fiesta engines with 122 g/km (both versions).

The Fiesta has been awarded a 5-star Euro-NCAP rating for safety.

Drawbacks of the Ford Fiesta
It is possible to find supermini competitors with a bit more space in the boot – the new Hyundai i20, for instance.

The rear seats will not be comfortable for tall passengers travelling long distances. Compared to most competitors, the Fiesta is a little more cramped in the back – not much, but still.

You can also argue that the finish and quality of the Ford Fiesta is not at luxury level, but it is still a vast improvement over the previous Fiesta model 2008-2012. Quality is not really a cause for concern as everything is well thought out, beautifully put together and the Fiesta feature more modern solutions than for instance the VW Polo (as of 2015). The feel of quality in the VW, however, is higher, and if you use the folding seats for carrying large items in the back, the Polo rear seats fold flat and the Fiesta rear seats don’t – they will fold, but not flat.

The Fiesta is very economical. If you fill it up with people (grown-ups) and luggage, however, it loses its edge to some extent as the small 1.0 engine has to work much harder.

If you need to travel far and fast carrying 5 grown-ups with luggage, the small capacity Fiesta engines in rental cars are still perfectly capable, but economy will turn out much worse due to the extra weight. In fact, it will most likely be cheaper to hire a larger vehicle and maybe even a diesel despite a slightly more expensive rental rate.