In the southern European holiday destinations such as Lisbon, Portugal and island of Crete in Greece it is not unusual to find the VW Beetle Life-style as a hire car for the holiday.

The power output may not seem like a lot, but it’s perfectly adequate for the Beetle as it isn’t meant as a sports convertible in the first place. The Beetle convertible is a “tall” 4-seater Cabrio and the ride is enjoyed best at moderate speeds when the roof is down - especially for the rear seat passengers.

Often the so called “New Beetle” hire car will be delivered with air conditioning and despite VW’s retro life style look with a real soft top, it still operates the roof fully automatically on the 2012 models.

In some European markets you may still find VW Beetle hire cars registered pre 2012, which in some cases means that they may not come with a fully automatic roof and air-con.

The beetle’s soft top canvas is strong and has a snug fit when closed, so taking a Beetle Cabrio to the car wash or driving in heavy rain showers is no problem for the beetle. As with all soft top cars, you should expect slightly more wind noise at high speeds than the equivalent hard top versions. When the Beetle’s roof is folded (on 2001-2012 versions) it rests on top of the boot instead of folding completely away. This adds to the Beetle’s retro look as this was also the norm for most convertibles in the 1950’s and 1960’s. As a consequence the “New Beetle” Cabriolet has never had the option of a detachable hard top but when the roof is folded down, it doesn’t compromise luggage space in the boot, as it is so often seen on other convertibles.

With the soft top folded, the New Beetle strongly resembles the classic lines of the VW Buggy with air cooled and rear mounted engine, which was produced in countless variations from 1949 up 1980 in Europe.

The new VW Beetle is however a far more modern car with a front engine and superior safety features underneath the classic lines. In fact the VW Beetle shares most of its components and platform with the VW Golf. 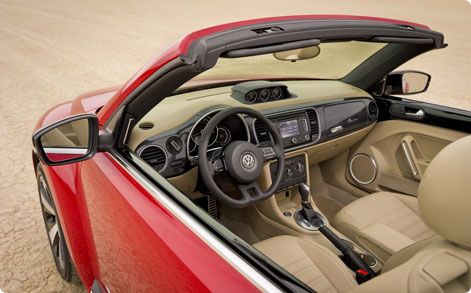 In 2005 the whole Beetle range was subject to a face-lift which consisted of slightly “sharper” bumper edges and slightly different head lamps. The front indicator lenses are noticeably smaller than previous versions and from the rear you can recognise the facelift version by the tail lights having a white circle in them rather than being completely red.

Holiday soft top car hire
Before choosing the VW Beetle as your holiday hire car, it’s worth noting that leg room in the rear is fairly limited. So for longer journeys the Beetle Convertible is more suitable for 2 adults and 2 kids than 4 adults.

With a capacity of just 201 litres, VW Beetle convertible’s boot space is also limited, relative to a normal car. 201 litres is roughly the capacity of two 28 inch suitcases or 4 pieces of maximum sized cabin luggage. Do bear in mind that with the odd shape of the Beetle’s boot - you may only be able to fit one large suitcase plus two pieces of cabin luggage into a Beetle convertible rental car boot. However, the Beetle’s “life style competitor”, The Mini Convertible, has even got a smaller boot with only 120 litres luggage capacity.

The ‘New Beetle’ was first revealed to the public at motor shows in USA and Japan in 1994-1995 under the name ‘Concept’. Spectators and the press were ecstatic about VW’s new retro concept.

Shortly after the launch of the ‘New Beetle’ it became apparent that VW’s niche car project had paid off. Even Volkswagen was overwhelmed by the immediate success of the new Beetle. The Beetle wasn’t particularly cheap; still the Volkswagen Beetle production line struggled to meet customer demand.

The New Beetle was perceived as quirky and cute and with unique details such as a flower vase integrated in the dash and a funky new colour scheme. The new Beetle ranked high on the wish list of customers who wanted to stand out and wanted something different - especially with women.

The most recent 2012 beetle, which is no longer called ‘New Beetle’, has grown in size, has significantly better interior layout and superior ride and handling compared to its predecessor.

Initially ‘The Beetle’ will only be available as a hire in limited numbers in Europe throughout 2012. However when ‘The Beetle’ Cabriolet is introduced in Spring 2013, more rental companies are likely to jump on the bandwagon and stock up the hire car fleet with both convertibles and standard Beetles. 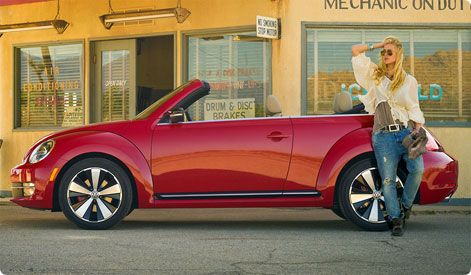 Since the introduction of folding metal roof convertibles, also referred to as CC (for Coupe Convertibles), the appeal of the classic soft top convertibles has dropped with many car rental companies.

The majority of all Convertible hire cars in Europe consist of the following:

Despite being rare on some European car hire locations you may also find the:

And lastly there’s the Ford Mustang Convertible which has gained enormous popularity as a rental car in The States, not least due to very competitive rates for a convertible hire car. Prime locations for Mustang car hire is Florida, Las Vegas or Los Angeles.

Punch Buggy – a 50 year old children’s game
The Beetle has always had a certain appeal, perhaps because it has always stood out from the crowd with its bold features.

Punch Buggy also known as punch bug, piggy punch, slug bug or Beetle bug is a children’s game which is simply based on who first spots a VW Beetle.

The rules of the game are, whoever spots a beetle first says “Piggy Punch” or “Beetle” followed by the colour of the Beetle which has been spotted. Whoever wins the point is entitled to give the fellow passenger a friendly slap and/or light punch after which the game is also named.

If you like the full set of punch-buggy rules, Beetle Enthusiast Janet Polk, has published this link.

The Punch-buggy tradition is more than 50 years old and is still played by children and teenagers across Europe.

Since the original Beetle Type 1 has become quite a rarity in later years, it would typically count double in punch buggy. Prior to the car journey it is agreed how many Punch- Buggies it will take to win the game (for example 5, 10 or 15) and from hereon it’s about spotting as many Beetles as possible by the kids in the back seat.