Chevrolet withdraws from Europe in 2015

In December 2013, General Motors, the giant of the automotive industry announced the decision to withdraw the Chevrolet brand from the European market by the end of 2015.

Chevrolet from South Korea to Europe
In Europe, GM is best known for its Opel cars, marketed as Vauxhall in the UK.

Since 1996, when South Korean Daewoo started manufacturing cars on the GM license, the concern showed a particular interested in low-cost models to be produced in South Korea. In the initial plans a better and improved version of an old Opel Kadett was considered to be revived in the form of Daewoo Nexia. A production plant was set in Poland for that purpose.

In 2005, Daewoo cars changed name to Chevrolet and could, thus, benefit from the better image and international recognition of Chevrolet USA brand.

After 2012, the low-priced Chevrolet products have met a steep competition from ‘over-lapping’ models offered by the original manufacturers who introduced a range of ‘discount’ vehicles, amongst them VW Up and Skoda CityGo, Seat Mii. Cheaper brands, such as Dacia did not make life easier for Chevrolet lower-medium class models in Europe. At that time, only the compact class Chevrolet Cruze registered reasonably good sales in Germany.

Chevrolet Cruze to be withdrawn from the car rental fleet in Europe.
© Photo: Find-cheap-car-hire.co.uk

Chevrolet poor performance in Europe
The GM’s original plan of creating a small and affordable ‘world car’, sold across the globe in a form of very similar models and through similar form of marketing, met unexpected difficulties in Europe.

Faced with such numbers, the US based company decided in December 2013 to gradually wind down the Chevrolet sales in Europe until the almost total withdrawal of the brand from the Old Continent. The only model of Chevrolet to continue to be sold through most of Europe is the iconic Corvette.

The brand expected to benefit the most form this move is Opel, which will have one less competitor on the market of small, inexpensive city cars, where Fiat and VW groups have also developed a strong position with models as Fiat Panda, Fiat 500, VW Up, Seat Mii and Skoda City Go (being Seat and Skoda subsidiaries of Volkswagen).

Chevrolet’s experience in Europe, however, was not a failure altogether. The brand registered a notable success in WTTC racing series in the period between 2005 - 2012 with the Chevrolet Cruze model being awarded the drivers and constructor prize in 2010 and 2011.

Chevrolet’s most popular models in Europe
One of the Chevrolet models most sold in Europe was the small 5-door city car Spark, GM’s safe bet, after the success of Daewoo Matiz. 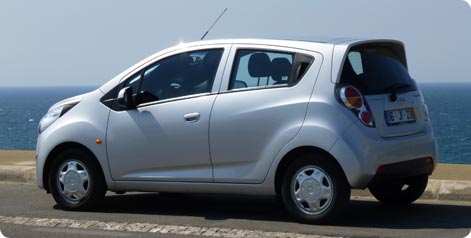 Given the growing popularity of the inexpensive, cheap to run and easy to park in a big city traffic cars, in spite of Chevrolet’s withdrawal from Europe, Spark is the best candidate to be sold through the extensive network of the other GM’s brand, Opel or even to become manufactured as Opel. Per 2014, Opel has only one similar model, the relatively old Suzuki-produced Opel Agila, in the portfolio.

The other popular Chevrolet’s model in Europe was Chevrolet Aveo.