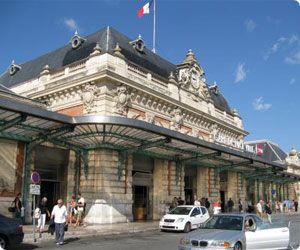 Nice's main train station, also referred to as Gare de Nice or Gare de Nice Ville, has originally been build outside of the limits of the city. The expanding urban area of Nice, however, have long absorbed the area of the train station, which now is considered a part of Nice's city centre.

Nice Railway Station receives trains from Toulouse, Bordeaux, Avignon, Lyon and Marseille, as well as from Paris - this route is served by the speed rail TGV. Amongst international destinations at Gare de Nice are Monaco, Genoa, Milan and Rome and Moscow.

Cartrawler France - Find cheap Gare de Nice car hire
The travellers arriving to Nice by train, and who wish to further explore the area of Southern France, can count on a range of car hire services at Nice railway station. Cartrawler search engine, available below, compares rates for Nice car hire from major rent a car companies at Gare de Nice. Choose 'Nice - Train station' as the pick-up location and get quotes for car hire from Budget, Alamo, Sixt, Europcar and Avis Rent a Car in Nice.