The Global Destination Cities Index by Mastercard, recently released, showed that about 260,000 more tourists visited the Polish capital in 2016, compared to the previous year, resulting in Warsaw’s shift to a higher position on the list of world’s most visited cities. 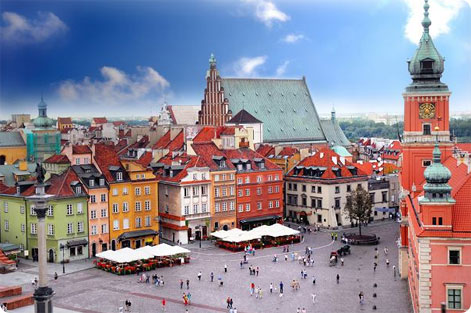 Warsaw continues to be a primarily leisure tourist destination.

Based on the data for 2016, Warsaw occupies the 65 position on the list, which includes 132 metropolitan areas across the globe.

Warsaw is the only Polish city indexed and it has climbed 7 places in the ranking, from position 72 achieved in 2015.

The 18% increase of foreign visitors places Poland’s capital in the forefront of the most dynamically developing countries in Europe as far as tourism is concerned. Only Sofia (Bulgaria) registered better growth parameters (although only marginally better, at 18,2%).

According to Mastercard’s survey, the great majority of foreign visitors to Warsaw – around 79,5% of the total number - are leisure tourists. Business travellers to Warsaw account for 20,5%.

The increasing number of foreign tourists in Warsaw translates into more money spent in the tourism sector.  In 2016 visitors from outside Poland contributed to Warsaw economy with $777 million USD. An average amount spent by a single foreign tourist in Warsaw in 2016 was $451, $6 more than in 2015. According to Mastercard’s prognosis, in 2017 the spending of foreigners in Warsaw will exceed $ 800 mln.

The growth of foreign tourism in Warsaw reflects the trend visible in the last few years. Between 2009 and 2016, the numbers of non-national tourists in the Polish capital increased, on average 9,4%.

For comparison, the city which appealed the most to the wallets of the tourists was Dubai, where the foreigners spent 36 times more than in Warsaw $ 28,5 billion. New York and London followed on the second and third place, respectively.

Bangkok ranked as first according to the number of visitors.

The Mastercard Global Destination Cities Index measures where and how tourist spend their money in the most dynamic travel markets around the world.