Hundreds of passengers at Lisbon Airport or heading to the Portuguese capital saw their plans altered as the national carrier, TAP Air Portugal cancelled nearly 50 flights over the past weekend of 7/8 April. 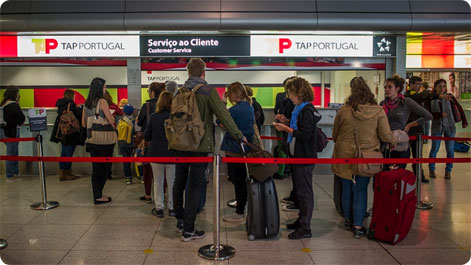 Queue to TAP Customer Service desk at Lisbon Airport. Many TAP passengers claimed they were not notified of the flight cancellations.

It is the second time in the recent past that the Portuguese carrier makes headlines and not for good reasons. During the Easter week several flights were called off due to pilots and cabin crew strike. Although, to be precise, the word ‘strike’ was not used; the pilots simply refused to work extra hours, sticking strictly to the workload stipulated by their contracts, which proved insufficient to ensure smooth operations during the busy holiday season.

This action was a form of protest against TAP’s wage policies. The pilot syndicates and the airline’s management do not seem to see eye to eye on what the acceptable wage rise should be; the pilots demand a raise of 40%, while the airline is willing to ‘update’ the salaries only marginally, by 3%.

The airline justified the most recent disruptions in regular traffic, rather vaguely, by ‘operational difficulties’, apologized to all the affected passengers and assured that those whose flights were delayed or cancelled will be compensated.

According to many passengers, the airline did not notify them about cancellations which resulted in rather chaotic scenes at the airport, with long queues to TAP customer support office. A number of complaints were filed to DECO, the Portuguese consumer rights organization.

Flight cancellations were registered amongst TAP flights on European as well as transatlantic routes. Also domestic flights were disrupted, affecting especially the Portuguese archipelago of Madeira on the Atlantic Ocean, where TAP is the main carrier providing connection with the mainland.