National traffic authority of Spain, DGT (Dirección General de Tráfico) has introduced important modifications to the Spanish Highway Code in regards to speed limits and stricter penalties for speeding. The new rules are in force since May 2014.

New rules for both Spanish and foreign drivers
Speed limit infractions in Spain will be treated now with less tolerance; exceeding the limit in only as little as 1 km may result in a fine of 100 euros. Also, more penalty points are endorsed on the driving license. The toughened rules apply for local drivers as well as for foreign drivers. 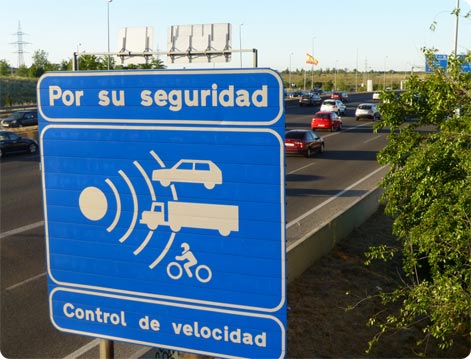 Spanish drivers are known for relaxed approach toward speed limit regulations: driving at an average of a 8-12 km/h over the limit is constant on the extensive network of motorways in Spain. A strict enforcement of the new speed limits by the Spanish road police will surely affect many Spanish speeders. British tourists on holiday in Spain should keep in mind that being reckless about respecting speed limits, may result in a number of costly fees, which at the first glance may seem to be ‘coming out of nowhere'.

Please, be aware of another novelty introduced to the Spanish traffic regulations: from May 2014 road police in Spain does not have to actually stop the driver to issue a fine. Witnessing the offence and registering the number plates are now sufficient bases for the Spanish police to issue a fine.

New speed limits on Spanish highways and in urban areas
While on some stretches of Spanish motorways the speed limit has been raised from 120 to 130 km/h, in many urban areas the limit was lowered from 30 to 20 km/h.

Simultaneously, the number of speed cameras increased considerably. Whenever the speed trap registers a violation of the speed limit, a fine is issued automatically and sent to the owner of the vehicle by mail.

Is the new Highway Code just a money making machine?
According to CDG (Dirección General de Tráfico ) the new rules aim at improving road safety in Spain, known for rather high rates of traffic accidents. According to some however, other factors contributed to toughening the traffic regulations.

The difficult economic situation and the record unemployment in Spain have force many to give up having an own vehicle or to reduce its use to the absolute minimum.

The decline of the motorway use in 30 % since the beginning of the crisis and the subsequent decrease in the state revenues is the reason why, according to the Spanish automobile associations, the roads authorities are looking for other way to find money. Hence the close to zero tolerance on even minor speeding offences and the instant issuing of the fines.

The speeding fines, if paid within 20 days are reduced in half. The period for lodging appeal has been extended to 20 days as well.

Speeding fines Spain - fines applicable with the new speed limits in Spain
According to the new regulations, the lowest fine for speeding, applicable for exceeding the speed limit in 1 - 20 km/h. The highest fine sets at 600 euros and additional 6 penalty point on the drivers license.

Spanish rental cars are also subject to those fines and car hire companies are obligated to provided name and address of the driver for the purposes of issuing a fine.

See the table of new fines and penalties for exceeding speed limits in Spain.