In November 2013, new air routes will increase the number of visitors to Portugal.

For the first time, the Irish low-cost carrier Ryanair will offer direct flights to Lisbon Portela Airport. Ryanair’s routes are already available to Faro Airport in the Algarve in southern Portugal and to Oporto (Porto) Airport in the North.

London-Stansted to Lisbon with Ryanair
Portuguese capital, Lisbon, is one of the most popular holiday destinations in southern Europe.

The city benefits from a successful combination of a privileged coastal location, a proximity to many excellent beaches, a splendid weather and a vibrant city life seems, being a an ideal destination for the low fare carrier Ryanair.

The most popular Ryanair’s route to Lisbon will undoubtedly be London-Stansted. In the first phase of "Lisbon operation" there will be two daily flights from London-Stansted to Lisbon: one in the morning and one in the late afternoon.

The announced price of Ryanair route from London-Stansted to Lisbon starts from € 25.99, excluding charges for luggage, etc.

The first Ryanair flight from London-Stansted to Lisbon will take off on 26 November 2013. 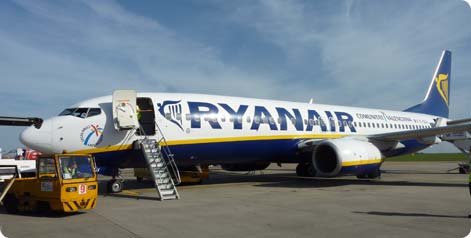 Those routes are very popular among the extensive Portuguese emigrant community living and working across Europe, especially in France and Luxembourg (a few hours drive from Charleroi Airport).

The route Lisbon - Paris seems to be a safe bet for the low-cost carrier. The French capital is sometimes referred to as the second largest ‘Portuguese’ city, after Lisbon. The number of Portuguese living in Paris is estimated in about 250 000, a number comparable to the population of the strict city centre of Porto, the second largest city in Portugal. Given those numbers, Ryanair’s new route between Paris-Beauvais and Lisbon is expected to sell many tickets.

Also, by extending the network of cheap flights to Lisbon, Ryanair is keeping-up with the growingly popular in Europe trend of urban tourism.

Blessed with a mild climate and plenty of sunshine throughout the year, Lisbon is a perfect European ‘city break’ destination during the winter. 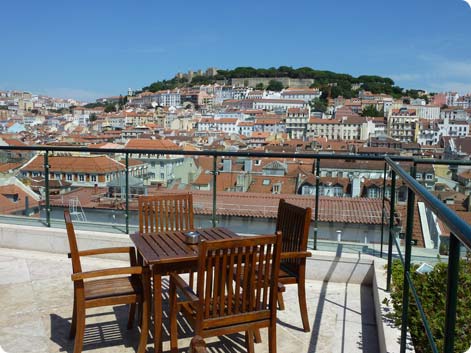 Lisbon seen from the top of Hotel Chiado © Photo: Find-cheap-car-hire.com.uk

You are more likely to benefit from very competitive car rental deals in Lisbon when visiting Portugal outside of the busy tourist season. In autumn, spring and winter it is not unusual to find offers of Lisbon Airport car hire for as little as € 70 for a 7 days rental of a small family car, such as Ford Fiesta or similar.

The sometimes extremely low prices of off-season car hire in Portugal are due to the fact that there is a large surplus of rental cars outside the busiest months of June, July, August and September. It usually pays off to compare prices of car hire from many providers before booking.