Is it safe to book airline tickets at Norwegian? – or is this airline about to go broke?

In autumn 2018, many airlines including Norwegian Air Shuttle, once again, found themselves in the midst of ‘The Perfect Storm’.

Anybody having watched the film starring George Clooney knows that taking a chance or running risks in a perfect storm has consequences. In the airline industry, any operator can go broke if the circumstances change abruptly to the worse, but some airlines are more in danger of going broke than others. 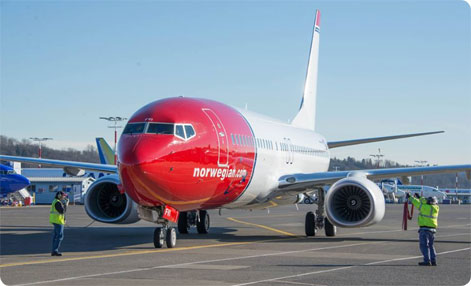 Is Norwegian going broke? – probably not, but the risk has increased

Norwegian going bankrupt? – this is why risk has increased
The Scandinavian company Norwegian Air Shuttle has been drawn into the spotlight by Credit Suisse as well as by the American wealth management company Bernstein.

Both investment companies have questioned if the amount of cash (in the bank accounts of Norwegian) would be sufficient to go through a crisis. If the amount of money available from own funds and credit facilities is less than a shock to the business require, in any airline, there is a severe risk of bankruptcy.

Norwegian Air Shuttle, as most airlines, faces the following difficulties:

Norwegian, with CEO Bjørn Kjos, is going through a crisis late 2018, which primarily is caused by the investment in the US-routes from Europe. As a secondary reason, bad timing with financial markets may play a role.

It is expected that Norwegian survives. However, it will not be surprising if Norwegian will be sold or partly sold to a larger airline (Lufthansa maybe).

It will not be very surprising if this low cost Norwegian airline is sold or partly sold – but as long as it is possible to find buyers, the risk for customers losing money by buying tickets with Norwegian is not alarming. The problem is if no other airline will want to be a potential buyer. This could potentially happen if all other airlines also would be in a financial crisis – in that case, most likely nobody would want to bid on a cash-strapped Norwegian or any other airline in trouble for that matter.

In the airline industry, sometimes, it is of outmost importance to be able to find 30-100 million euros (or pounds) very quickly – quickly as in 2-3 days, if you want to avoid going bankrupt.

If the major European larger airlines are under pressure when/if this situation possibly occurs for Norwegian, potentially nobody will want to step in. Norwegian is stronger and better run than most of the smaller and medium sized airlines, but in the perfect storm, anything can happen. Norwegian, definitely, has found itself taking a risk.

How not to lose money buying airline tickets? – buy with credit card
The best idea when booking your plane ticket with Norwegian is to pay with credit card (not debit card). In this way, at least the price for the ticket is secure as the credit card company (VISA / Mastercard / American Express) will refund any product or service not delivered. Please note that if you pay with any form of debit card, your money will be lost in case of Norwegian going broke.

Related article:
How to avoid scams when renting a car