It has been acknowledged as the third largest airport in the world in terms of the number of passengers served. It also has the largest total terminal area (m2) compared to all other airports in the world. 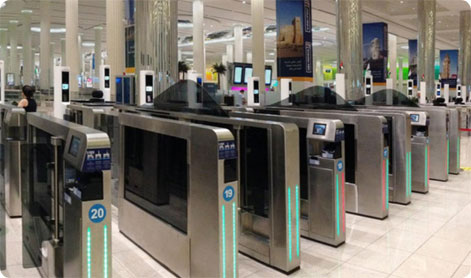 Smart gates, one of the modern technological solutions at Dubai airports: Dubai International and Al Maktoum.

In the 1,972,474 m2 of three terminals of the main Arab Emirates airport, you find a duty free shopping center, several interactive playing areas for children, yoga pavilions and zen gardens with real palms. You also will notice a fish pond and benches prompting tired travelers to relax. 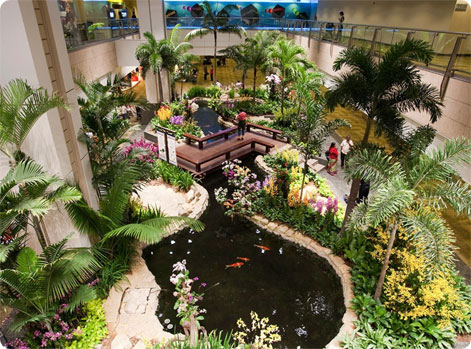 An oasis of peace at one of the biggest airports in the world.

Dubai International Airport is probably the one of the few airports in the world where the long waiting time for an airplane is not a nuisance, but an advantage because of the huge selection of attractions, which are prepared here for passengers’ comfort.

Thanks to the constantly implemented technological innovations, the Dubai airport will soon become one of the most modern airports in the world.

Already in 2002, the first automatic passenger control gates were introduced,whichreducedthe timefor passenger identification to 10-15 seconds and that ledto drastic shortening of the queues.

Nowadays there are 68 of them at the whole airport, 20 of which are smart gates, meaning smart gates of the latest generation, installed at the arrival hall of Terminal 1 DXB.

The gates are equipped with the system of automatic passenger identification, which is based on biometric data, face recognition system and iris scanner. While the older generation of gates required the biometric passport, for new gates a personal ID of the United Arab Emirates is sufficient. Smart gates can be used by people aged 18 and above. Travelers with children still will need to use traditional, manned gates, which often means queues.

Smart gates of the latest generation make life easier not only for the citizens of the United Arab Emirates, but also for foreigners, who were issued the local ID as well as for the GCC (Gulf Cooperation Council) residents, including Kuwait, Qatar, Bahrain, Saudi Arabia, Oman and the United Arab Emirates. The gates can be also used with the QR code, generated by the GDRFA application for smartphones.