In order to reduce the use of private vehicles in favour of public transportation in the Spanish capital, Madrid limited traffic zone, also known as APR (Área de Prioridad Residencial) will extend to two more neighbourhoods. From 1 January 2015 traffic restrictions will apply in the areas of Sol and Palacio. 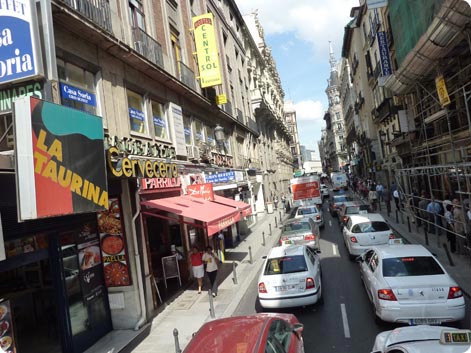 Congested traffic on the streets of Madrid © Photo: Find-cheap-car-hire.co.uk

Driving bans for non-residents are already in force in Embajadores, Cortes and Barrio de las Letras in Madrid city centre. The first APR area was established in Cortes and Las Letras in 2005, the Embajadores neighbourhood followed in 2006.

Due to Madrid’s struggle with traffic congestion and high pollution levels, apart from the inclusion of Sol and Palacio neighbourhoods in the APR /limited traffic area, other parts of the city are expected to be closed off to vehicle traffic in the future.

This sign in Madrid means no access for private cars or rental cars if the owner of the car / renter of the car is not a resident in the area. 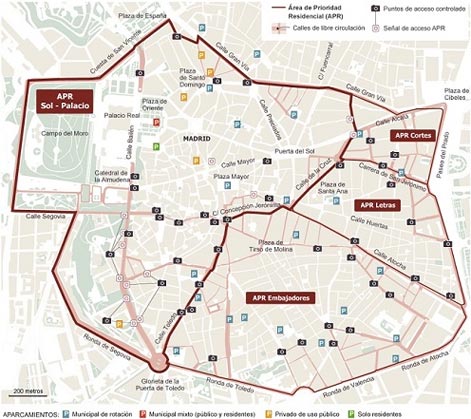 The access to the limited traffic zones for non-residents is still possible, however only on major roads in each area, marked pink in the map above. Those are known in Spanish as ‘calles de libre circulación’ and provide access to parking areas. Non-residents driving a private vehicle who do not park in an APR zone and merely circulate are liable to fine of EUR90.

More environmental zones in Spain’s capital, less driving in Madrid
The plans to limit private vehicle traffic in Madrid city centre go far beyond the current restrictions. The mayor of Madrid, Ana Botello has already announced her intention to extend the APR zone to the area of Universidad and Justicia areas, before she leaves the office in May 2015.

Fine for driving in Madrid limited traffic area / APR zone
Madrid’s APR zones are monitored by traffic camera which register the number plate of each vehicle. Non-residents driving in the restricted traffic areas of central Madrid incur a fine of 90 euros.