Heathrow Airport registers slower growth than other FLAP airports in 2014

According to the recently released traffic statistics, London Heathrow Airport served 73.4 million passengers in 2014, which represents a 1.4% increase on 2013. The major boost to the passenger numbers came from the emerging markets, Latin America, East Asia and Middle East & Central Asia.

A significant growth of 5.3% was registered also in cargo traffic. In 2014 the airport transported 1.5 million metric tonnes of cargo.

The increase in traffic was especially accentuated during the festive season in December when 2.4% more passengers than in 2013 chose to travel via Heathrow Airport. 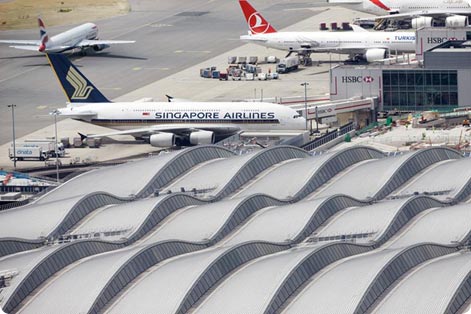 The 2014 figures for London Heathrow look, however, quite less optimistic when put in perspective of Europe’s busiest airports of the so called FLAP group (from Frankfurt, London, Amsterdam and Paris). All of Heathrow Airport’s closest competitors registered higher growth in 2014:

Additionally, in 2014 a new contestant has joined the race towards the title of Europe’s largest airport: Istanbul Ataturk Airport, with an impressive growth rate of 11.1% overtook Amsterdam-Schiphol and placed itself at the fourth position on the list of the busiest airports in Europe. If the growth tendency continues, the largest airport of Turkey stands a chance to beat Frankfurt Airport and become Europe’s no. 3.

Heathrow Airport fell behind the competition not only in the growth rate but also in terms of a number of airlines using the airport and the number of destinations served, having added in 2014 only one new destination (never served before), Austin, Texas.

The much slower growth of Heathrow Airport, as well as space limitation for further runway extensions call into question  the airport’s capacity to remain Europe’s leader in air traffic.