Europcar is one of the world’s leading car hire companies. 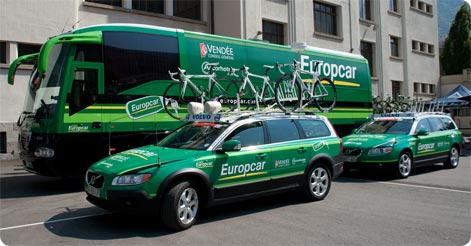 Europcar sports sponsorship
Ever since Eurazeo acquired the giant of car hire industry Europcar, its marketing strategy has developed towards greater visibility in public sphere, focusing on outdoor advertising campaigns and sponsorship of popular sports events.

The French cyclist Thomas Voeckler is the main star of Team Europcar, with the forth position at 2011 Tour de France race as his best result ever.

All the teams in UCI ProTeam category are entitled to enter the prestigious Tour de France race.

Between 19 and 23 of February 2014 Team Europcar runs in the Volta ao Algarve stage of the World Tour in southern Portugal.