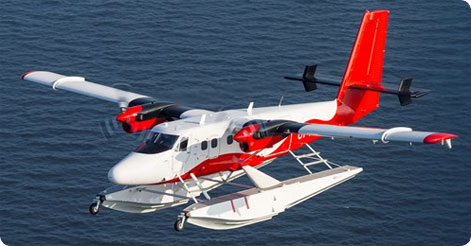 Due to the great interest from the customers and sustainability of this service, the company decided to increase the number of daily departures, starting in early August.

The new flight schedules came into force on 8 August 2016

The main obstacle to the success of the Aarhus-Copenhagen seaplane route was the bureaucracy and a large number of permits and licences needed before the service could become a reality.

Having overcame that difficulty, Nordic Seaplane may look optimistically into the future as the interest in the seaplane Aarhus-Copenhagen seems to be constantly increasing. For now, all 5 daily departures are operated by a unique aircraft.

In Maldives, in the Indian Ocean, Trans Maldivian Airways is one of the most important transportation providers, serving over 60 destinations within the archipelago. After merging with another company, the Maldivian Air Taxi, it became one of the largest seaplane operators worldwide.

The funder of Maldivian Air Taxi, which in 2013 was sold to Blackstone Group, was Lars Erik Nielsen, quite a prominent figure in Denmark. Prior to his career as a businessman, Nielsen became famous as a car racer, successfully running in Le Mans races in the GT2 class.

His daughter, Christina Nielsen, continues the family tradition. As the first Danish female ever, Nielsen participated in the Le Mans 2016 race, driving a Ferrari 458 in Johnny Laursen team.

The aquisiton of both Maldivian Air Taxi and Trans Maldivian Airways in 2013 by the American private equity fund Blackstone Group led to creating the largest seaplane operator in the world. The new company runs a fleet of 45 aircrafts, a majority of them being DHC-6 Twin Otter, which is the same type as the aircraft used by the Nordic Seaplanes.

Vancouver Harbour and Victoria Harbour are some of the best covered Harbour Air Seaplanes locations in Canada.

European seaplane operators are small and are found primarily in Greece and Croatia. Previously, Harbour Air Seaplanes from Canada was involved in a local route between the islands of Malta and Gozo. This route, however, is currently closed.