The cheapest beach holidays in Europe

The Post Office Money has released a survey on the price of holidays in the most popular beach resorts in Europe.

The already 11th edition of the Holiday Cost Barometer focuses on the cost of an average holidaymaker essentials. Products and services the most often purchased by the UK tourists  were considered for the purposes of the survey, amongst them: meals for two, water, sodas, alcoholic beverages, coffee, sunscreen, UK newspaper and.. insect repellents. 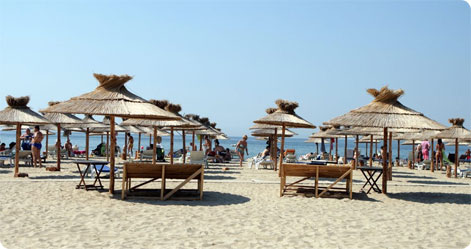 Based on the total cost of the items chosen for the purposes of the study, popular European resorts were divided in three groups: budget price resorts, where the total price summed up to £80 (or less), medium-price resorts, where £80-£100 were needed to purchase the same products and expensive resorts, with prices above £100 for the basic holiday expenses.

The results of the survey showed quite accentuated discrepancies in the cost of holiday not only in Europe (Southern Europe, that is), but sometimes also within particular countries.

Budget beach resorts  - Bulgaria, Portugal and Spain in the lead
While a cup of coffee is on average the cheapest in southern Portugal (and so is wine, for that matter), it is in the Sunny Beach resort in Bulgaria, where one day of a typical holidaymaker is likely to cost less. The total cost of the above mentioned products in Sunny Beach was estimated at less than £40.

On the other end of the scale within the group of budget beach resorts is Limassol in Cyprus where the same items cost twice as much, nearly £80. See the list of the cheapest beach resorts in Europe:

Average-priced holiday resorts in Europe
Greece dominates amongst the mid-range beach resorts considered in the study:

The Lisbon Coast, apart from the Portuguese capital which itself is mostly a city-break destination , includes various beach areas on both banks of the Tagus River estuary, as well as along the nearby Atlantic coast. Cascais, Estoril, Carcavelos, Guincho and Costa da Caparica are some of the best beach sports within a 30 minutes to an hour drive distance from Lisbon.

Expensive beach destinations in Europe
The cost above £100 for the bulk of holiday essentials determined the high-end beach resorts for the upcoming holiday season in Europe and those are:

The difference between the cheapest and the most expensive resorts is, in fact, significant and also surprising, considering the fact that the same country can be in both groups. It shows the importance of conducting even a basic research on the reality of the holiday destination, especially for the travellers on a budget.