The residents on the Spanish island of Mallorca have been facing increasing difficulty in finding apartments to rent at reasonable rates.

The market for short-term rental, now easily accessible via apps like Airbnb, has become so profitable that homeowners lost interest in renting long-long term. A large demand for weekly rentals from tourists, does not allow the locals to keep up with the constantly increasing level of prices. 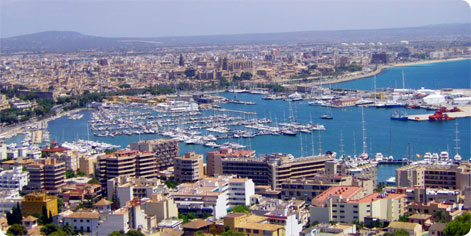 The city of Palma is the tourists hotspot on Mallorca.

Ban on Airbnb, Homeaway and similar form July
Unlicensed holiday rentals are common in popular tourist destinations. Only a small fraction of all the private rentals are registered and comply with the safety regulations as well as tax obligations.

Despite steep fees for unlicensed rental – up to €400.000, the homeowners in Mallorca, Ibiza, Formentera and Menorca, continue to take their chances, lured by the prospects of an easy gain via websites facilitating holiday rentals.

The ban on advertising unlicensed holiday rentals on websites as Airbnb and Homeway, effective in Palma from July 2018, will allow the local authorities to control the short-term rental market, and help the local residents with their struggle against the extortionate rates. The price of rental apartments in Palma de Mallorca is said to have increased by 40% over the last 5 years.

The holiday rentals association and Airbnb themselves have criticised the ban, pointing out the negative effect it will have on the economy of many families who live off tourism.

Not tired of tourists, but looking out for the locals
The mayor of Palma, Antoni Nogueira justified the decision of putting the private rentals under the radar by the necessity to regulate the short term rental market and to create equal opportunities to rent for the residents. He also pointed out the many complaints for Palma’s inhabitants about the deterioration of living conditions in the most popular tourist areas, constant noise and the questionable behaviour of drunk tourists which flood the island every summer.

Stricter regulations regarding alcohol consumption in public places are to follow in Mallorca, in order to mitigate the influence of mass tourism on the lives of the local residents.

The stricter control of unlicensed rentals was the petitioned by Palma’s federation of neighbourhood associations and supported by over 6,000 signatures.

In the past year, Spain received over 82 million tourists, a number which corresponds to nearly the double of the country’s total population.

Despite the fame of a popular tourism destinations, many large areas of inland Spain are desolate and sparsely populated, attracting no tourists at all.
Apart from the capital, tourism in Spain concentrates on the southern coast, in Barcelona (Costa Brava), Malaga (Costa del Sol), Alicante (Costa Blanca) and on the Spanish archipelagos – the Canary Islands on the Atlantic and the Balearic Islands on the Mediterranean Sean.

British, German and French are the most frequent visitors to Spanish holiday destinations; each year more than 10 million guests from either UK, Germany or France arrives to Spain.

In the following positions are Italians, Dutch, Belgian and Americans, Portuguese, Swiss and Irish; all groups with about 2 million guests in Spain per year. Over 1 million Russians make for a relevant segment of foreign tourism in Spain, other nations accounting for less than a million.