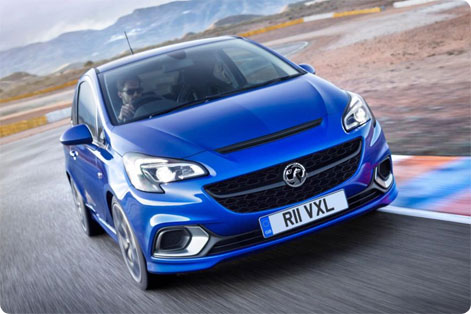 Vauxhall Corsa, a popular choice in economy class car rental at Southampton Airport. In the fleet of for example Hertz Car Hire

Cartrawler lists the most competitive offers in a wide range of car rental classes, from the most popular economy and compact cars to full-size vehicles and people carriers to rent in Southampton.

Southampton Airport car hire providers
It is possible to rent a car at Southampton Airport from major car rental companies, such as Alamo, Avis, Budget, Hertz, Enterprise Rent A Car, National and Europcar, as well as from the low-cost rent-a-car providers: Interrent, Keddy and Low C Rent Vehicle Hire.

Please note that the last brand mentioned is an off-site company, operating at Southampton Airport on a ‘meet and greet’ basis.  When searching for car hire deals on Cartrawler, you will find the information about the pick-up mode in the description of each offer.

In the offers with limited mileage only a defined number of miles is included in the price, being any extra miles paid additionally. Budget-savvy travellers should calculate carefully the distances they are planning to cover in the hire car or opt for offers with unlimited mileage.

Especially the cheapest offers, or the ones available from low-cost car rental providers are likely to bear mileage restrictions.

About Southampton Airport
The 18th busiest airport in the UK (by the number of passengers handled) is located approximately 4 miles north-east of Southampton city centre.

Southampton Airport – SOU has the low-cost carrier Flyby as the main airline, offering cheap flights to a variety of destinations in Europe (amongst them Alicante, Amsterdam, Dusseldorf, Malaga, Milan and Paris) as well as on domestic routes (Glasgow-International, Manchester and Newcastle, to mention some).

Edinburgh and Glasgow-International are the busiest domestic routes at Southampton, while Amsterdam, Paris and Alicante are the most frequently chosen international routes.

Southampton Airport is conveniently located close to M3 and M27 motorways which allow easy access to Portsmouth, Bournemouth and further on to London.

Those travellers who do not plan renting a car at Southampton Airport will find several public transportation solutions available at the airport, amongst them dedicated railway link. Southampton Airport is one of the few European airports which have their own railway stations. SOU train station is located in only a minute walk distance from the terminal. Southampton Airport Parkway, as the station is called, offers services to Southampton city, Winchester, Bournemouth, Poole and Dorchester, as well as to London Waterloo.