Zakynthos International Airport - ZTH, officially known as “Dionysios Solomos” Airport is the only airport serving the Greek island of Zakynthos.

Zakythos, also known as Zante, is located in the Ionian Sea, west of the Peloponnese Peninsula. See Zakythos on the map of Greece.

The airport receives most of the traffic during the summer months, as Zakynthos is a popular beach holiday destination. Year-round flights to Zakynthos are available form Greece mainland (Athens) and other Greek islands.

Rent a car and make the most of your holiday in Zakynthos
Car hire is a great way of enhancing your holiday experience on Zakynthos: the islands has a comfortable and fairly new network of roads (built after the 1953 earthquake which destroyed most of the original infrastructures) and car services are widely available both at Zakynthos Airport and in the city centre.

Zakynthos Airport car rental providers
At Zakythos Airport it is possible to rent cars from airport-based providers, such as Hertz, Thrifty, Europcar, as well as from the off-side car hire companies, amongst them: Auto Union, Avis Rent A Car, Budget, Olympic Car Rentals or Green Motion.

Please note that the car hires companies which do not have offices at the airport, deliver rental vehicles to the customer upon arrival, on a “meet&greet” basis, or provide courtesy shuttle bus to their rental stations in a short distance from the airport.

Book well in advance for cheap car hire in Zakynthos
Early booking are advisable for price-conscious travellers who intend to hire a car in Zakynthos Airport in the summer.

Although Zakynthos car rental is, generally, cheaper than on other popular Greek islands, such as Crete or Rhodes, in the busiest period for tourism – in July and August – the prices of car hire increase considerably, especially if the booking is made late.

Search engines of car hire, such as Cartrawler, allow you to compare prices of Zakynthos Airport rental cars at different time of the year and to book online, once you have found the ideal offer. 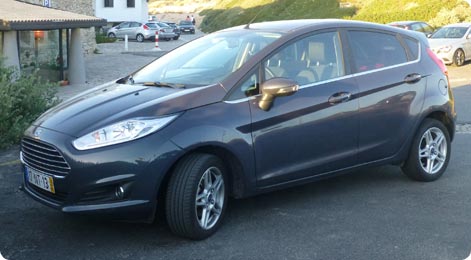 A  Ford Fiesta is an economic solution for car hire and offers a lot of space for the price. © Photo: Find-cheap-car-hire.co.uk.

Zakynthos car hire off-season – Zakythos weather
The island of Zakynthos is blessed with a mild climate and many sunny days throughout the year. The temperatures in Zakynthos remain over 20 degrees Celsius for the large part of the year, allowing to escape the tourist crowds - and inflated prices - of July and August.

Should your schedule allow it, book your Zakynthos holiday in early Autumn and be surprised by the accessible rates of car hire.