Car hire at Qatar’s main airport is easy to book at affordable rates with the help of Cartrawler search engine. Cartrawler works with all the major car hire companies operating at Hamad International Airport, also commonly referred as Doha Airport.

Mitsubishi is a popular make in Qatar. The Lancer, above, is one of the most frequently offered cars in economy class. Available in the fleet of, for example, Europcar at Hamad International Airport

Car hire is fairly inexpensive in Qatar. By booking via Cartrawler, you can be sure to get some of the most competitive offers from major rent-a-car providers in Doha Airport, such as Avis, Europcar, Sixt, Hertz, National, as well as from the local car rental companies, amongst them Al Muftah Rent A Car and Al Futtaim.

Please note that small city cars, very popular in Europe, are rather difficult to find in Qatar car rental fleets. On the other hand, you will find quite a large selection of large SUV’s (for example Mitsubishi Pajero, Nissan Xterra, Chevrolet Blazer) and pick-up trucks (Nissan Pickup, Toyota Double Cab or similar), much in demand for driving on the dusty desert roads outside of the large city centres. 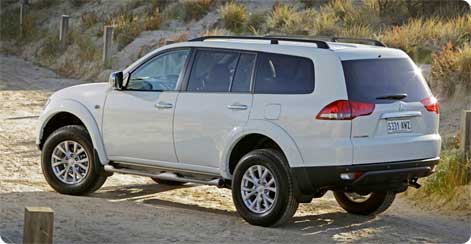 Mitsubishi Pajero – a large SUV to rent in Doha Airport

Rates for Qatar rental SUVs are usually quite competitive, too. A 7-days rental of the Pajero, above, is often priced from around £350, or even less, when the booking is carried in advance.

Minivan and minibus hire Qatar (Airport)
Cartrawler’s range of offers of Qatar hire cars includes quite a comprehensive choice of people carriers, with capacity for 7 to 9 people, amongst them Toyota Previa and Honda Oddysey minivans and Nissan Urvan and Toyota Minibus 9-seaters. Please note that people carriers are usually in high demand at the airport – booking in advance is recommended.

Transportation from Hamad Airport to the city centre
If you are not planning the rent a car at Hamad Airport, there is plenty of alternatives. The airport is connected to Doha city centre via city’s public transportation system and more precisely via 109 and 747 bus services. All buses depart from a designated area located just outside the passenger terminal. The way to the bus pavilion is signposted throughout the arrivals area. The cost of a bus fare from Hamad Airport is fairly low, starting from QAR 10 (less than GBP 2) for wo trips within the 24h in the Greater Doha area (the so called Karwa Smartcard 24 Limited).

Taxi services between Hamad Airport and the city centre are also rather inexpensive, from QAR 25 (approximately GBP 4.5). It is recommendable, however, to use only the airport licensed taxis, available in the taxi pavilion. Those are always metered and maintaining high comfort and safety standards.

Qatar, together with other wealthy Arabic states is, perhaps, one of the places in the world where chauffer-driven limousines seem a common commodity. A wide choice of limos is available at the airport, for both bookings made in advance and for the walk-customers.

Qatar new and old airports
Hamad International Airport is the main airport of Qatar. It serves Qatar’s capital, Doha, having replaced, in 2014, the former facility which is now referred to as the old Doha Airport.

Built on the grounds reclaimed from the waters of the Persian Gulf in a rather costly process, the new airport is located only about 3 miles away from the old one, retaining the original IATA code: DOH.

The airport is named after Qatar’s former Emir Hamad bin Khalifa, who stepped down from power in 2013, in favour of his son, Tamim.

Flights to Doha
The majority of all operations at Hamad Airport are flights to and from destinations in the Middle East region. Doha is also connected to Europe through Lufthansa’s route to Frankfurt, as well as through Qatar Airways services to a variety of airports, amongst them Athens, Barcelona, Budapest, Frankfurt, Geneva, Munich, Oslo, Paris CDG, Rome Fiumicino, Vienna and Warsaw Chopin. UK flights to Doha are available from Birmingham, Edinburgh London Heathrow and Manchester.