The main airport of the Czech Republic is located  approximately 6 miles west of the capital, Prague. Officially known as Václav Havel Airport, in honour of the first Czech president, Prague Airport – PRG is one of the busiest airports of the newest EU members, having served in 2016 over 13 million people. The previous name, ‘Prague-Ruzyne Airport’ is still in use locally.

The location in the heart of Czech Republic’s major motorway network makes Prague Airport a convenient point for travelling not only to Prague itself, but also to other popular Czech destinations as for example Karlovy Vary, Pilsen, Brno or Pardubice.

Skoda CitiGo is a popular choice of a small city car to rent in Prague.

Travelers willing to continue their journey independently in the Czech Republic, will find a variety of car rental companies at Prague Airport, offering their services at often very competitive rates.

Prague Airport car rental companies
The choice of rent-a-car providers ate Prague Airport is very comprehensive and includes both international brands, such as Avis, Budget, Dollar, Hertz, Europcar, Sixt, Green Motion and Alamo, as well as local, Czech companies, amongst them Dvorak Rent A Car and Czechocar. It is also possible to rent cars at Václav Havel Airport from the Polish supplier Rentis and the low-cost car rental brands Flizzr and Rent Plus.

Best Prague Airport rent-a-car deals – compare and book online
Those looking for a cheap means of transportation during their stay in Prague will find a variety of affordable offers.

Even during the high season it is often possible to rent the cheapest cars in Prague from about £70 for a week, when booking online.  Internet search engines, such as Cartrawler, are very helpful in finding the best deals; not only do they allow to compare prices from many suppliers at the same time, but also offer rates more competitive than those available directly from the car rental companies.

Skoda CitiGo, VW Up and Smart Fortwo are amongst the cheapest rental cars to rent at Prague Airport. If small size is not actually an advantage, for example for the easier parking, do consider however renting car in a higher class, as the difference in price between the most popular rental classes is usually very small. Moreover, an economy class VW Polo, Seat Ibiza or Skoda Fabia from a low-cost car rental company is often available at the same price as a mini class car from a regular brand.

Good deals can also be found in more specific segments of hire cars at Prague Airport, as for example people carriers, SUV’s or premium cars.

Even at the pick of the tourist season, when the demand is the highest, it is possible to find the cheapest 7-seater to rent at Prague Airport from about £400 for a week, provided the booking was done in advance. 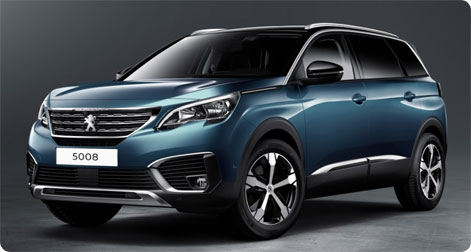 Peugeot 5008 is a popular people carrier in the fleet of Prague Airport car rental companies.

Airlines and destinations at Prague Airport – UK flights to Prague
Prague Airport is served by over 60 airlines. It is a base for the flag carrier Czech Airlines as well as for the low-cost airlines Wizzair and Ryanair, all free of which operate flights from the UK. See below the list of major UK-Prague routes as per summer 2017:

Prague Airport to city centre by public transportation
Prague Airport is well connected with Prague city centre. For those travellers who are not renting a car at the airport, the available alternatives include: taxi (a ride to the city centre costs about €25 and takes approx. 30 minutes or a combined public bus/metro ride. The 100 bus, which departs from the stop in front of the arrivals terminal connects to the terminal of the yellow line of the Prague metro, while the 119 bus connects to the green line, both of which lead into the city centre.

See map of public transportation from Prague Airport to the city centre.

Although this way of travelling may seem inconvenient, especially when travelling with a large luggage, it is in fact quite simple and surely economic. The 90 minutes ticket, valid in both bus and metro can be purchased in the ticket machines at the bus stop at the price of only 32 Czech koruna which is an equivalent of about £1.10. The journey time from the airport to Prague centre is about 60 minutes.