Serving nearly 5 million passengers per year (data for 2016), Pisa Airport is the 11th busiest and Italy. It is also the main gateway to the beautiful Italian region of Tuscany. 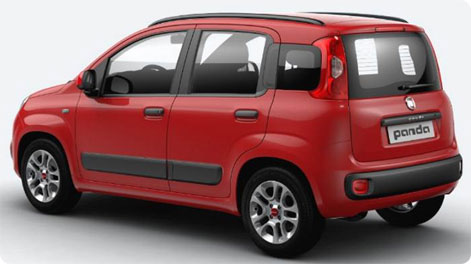 Fiat Panda is a popular choice of an economy rental car in Italy. In the fleet of most rent-a-car companies at Pisa Airport.

Officially known as Galileo Galilei Airport – PSA, Pisa Airport is located about a mile south of the city centre. Superstrada Firenze-Pisa-Livorno, which passes right by the airport allows easy access to Florence and Livorno. The SS1/E80 motorway, west of the airport leads to Viareggio and La Spezia.

Travellers on a self-drive holiday to Tuscany, will find a wide range of car rental offers at Pisa Airport, often at competitive prices, in comparison to larger tourist centres in Italy, for example Rome or Milan.

Pisa Airport car rental companies – where to find them
It is possible to rent a car at Pisa Airport from large international brands, such as Avis, Sixt, Europcar, Hertz, Firefly, Goldcar as well as from the Italian rent a car companies WinRent, Sicily by Car and Liberty Rentals. Enterprise Rent A Car Pisa operates under the same banner as the Italian Locauto.

The desks of Pisa Airport car rental providers are found in a dedicated facility located approximately 500 meters from the terminal. It can be reached on foot (a 5 minute walk) or by a shuttle bus.

Cheapest car hire Pisa
Much like in any other Italia destination, at Pisa Airport small city cars are amongst the most popular rental options.

A Fiat 500, an Opel Adam, or similar are usually available from around £100-120 for a week of car hire in the high season. This type of a car is perfect for a single tourist or a couple, with limited luggage. Easy to handle in busy city traffic and park, cars in the mini class do not offer much comfort in terms of interior space and equipment. Luckily, there is usually only a small difference in price between the mini class and economy or even compact class.

In the same busy summer period a VW Polo, a Ford Fiesta or a Fiat Punto is often available to rent from about £140 for a week.

The best offers on Pisa Airport car hire are frequently found via internet search engines, such as Cartrawler Italy, which collaborates with a large number of suppliers, allowing for competitive prices.

Public transportation Pisa Airport
If Pisa is your final destination after disembarking at Pisa Airport, a rental car is not a must. Pisa historic centre is fairly small, best explored on foot and the airport offers convenient solutions for transfers to the city.

The airport is located about a mile from the Pisa Centrale railway station, on southern city limits and connected to it via modern (inaugurated in 2017) People Mover. The fully automated, high-speed train takes only 8 minutes to cover the distance between the airport and the railway station.

Alternatively, there is a wide selection of bus lines with destination in Pisa centre or in other cities and towns of Tuscany, amongst them Florence, Siena, Lucca and Viareggio.

The taxi fare from the airport to Pisa ranges between €13 and €20, depending on your final destination in the city centre and the traffic along the way.