The Italian region of Abruzzo is served by a steadily developing international airport located near the city of Pescara on the Adriatic Coast.

The Abruzzo Airport – PSR, also referred to as Pescara Airport can be reached from Milan-Linate, Rome-Fiumicino and Bergamo on domestic routes, as well as from major European cities, amongst them Paris, Brussels and London.

For passengers who would like to continue their journey in Abruzzo in a hire car, Pescara Airport offers a variety of car rental solutions. 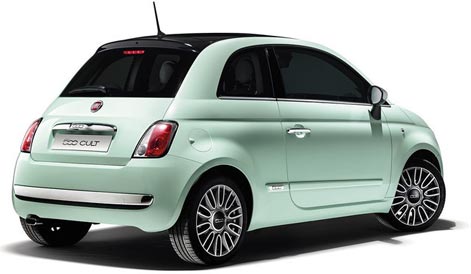 Fiat 500 is one of the cheapest rental cars in Italy. In the fleet of all major car hire companies at Abruzzo Airport.

The airport is served by all the major car hire companies, amongst them Avis Rent A Car, Budget, Europcar, Hertz, Sixt Car Rental and the Italian Maggiore and Sicily by Car, as well as by a number of lesser known local providers.

Cheap car rental Italy – book in advance
In the high season it is usually possible to book the cheapest car – a Fiat 500, a Citroen C1 or a Fiat Panda - in Abruzzo Airport from around £160 for a week. Local rental car fleet is very comprehensive and it is very easy to find cars to suit every needs and tastes. Prices in the popular Golf class (compact class) start from about £210 for a week of Abruzzo car hire in July and August and around £180 outside of the high season. 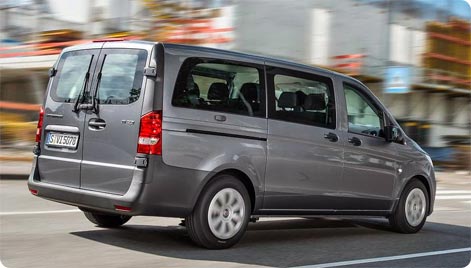 Mercedes Vito Traveliner is, together with Fiat Ducato, one of the most common minibuses to rent in Pescara Airport.

When a larger car is required, with space for more than 5 people, Pescara Airport offers a selection of minivans (7-seaters) and minibuses (up to 9 seats). Do remember, however, that the demand for this type of vehicles is high during the holiday season and it is recommended to carry booking for July and August well in advance.

Abruzzo for tourists
Tourism is a fairly new phenomenon in Abruzzo region which until not a long ago was considered one of Italy’s poorest areas. A substantial economic growth of Abruzzo initiated in the 50-ties helped to promote the region’s tourist attractions, which are many. Abruzzo, encompassing four provinces -  Teramo, Pescara, Chieti and L’Aquila (see map) offers beautiful and varied landscapes, from the beaches of the Adriatic coast to the mountain ranges of the Apennines in the interior.

Often referred to as “the greenest region of Europe”, Abruzzo boasts several national parks and natural reserves, as well as plentiful opportunities for outdoor sports. Culture lovers will find in Abruzzo rich historic heritage: medieval castles and walled towns, museums and old churches. Last but not least, Abruzzo is also known for its excellent wines, amongst them the famous Montepulciano d’Abruzzo.

Abruzzo is well connected to other regions. From, for example Pescara, it is only a 2 hour drive to Rome by the A 25 highway.