Although not as popular as other major airports on the southern coast of France, Nimes Airport can be a convenient point of access to Provence, especially for the tourists from the UK. 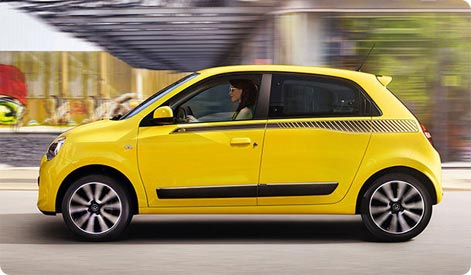 Visit Provence in a Nimes Airport hire rental car. Above Renault Twingo, one of the smallest (and the cheapest) cars to rent in France.

Ryanair is the main carrier at Nimes Airport, operating year round flights to London (Luton and Stansted), Brussels Charleroi and Fes, as well as seasonal flights to Liverpool. The Spanish carrier Iberia flies (seasonally) to Nimes from Palma de Mallorca.

Nimes Airport – FNI is located in Garons,  approximately 5 miles southeast of the city of Nimes. Being often referred to as ‘Garons Airport’.

‘Nimes-Ales-Camargue-Cevennes Airport’ is the official name.

When searching for the best rent-a-car deals at Nimes Airport, Hertz, Thrifty and Enterprise Rent A Car will be the most frequent suggestions.

The range of cars available to rent varies from the most popular mini, economy and compact classes, through full-size and estate cars, to large people carriers. At Nimes Airport minivans and minibuses come in a short supply, however, so booking in advance is recommended.

Southern France car rental – cheaper off-season
Much like it happens in other destinations in southern France and especially in the French Riviera, in the summer season prices of car rental increase significantly. While off-season it is usually possible to book the cheapest cars (Renault Twingo, Chevrolet Spark, or similar) from around £150 for a week, in July and August, be prepare to spend at least £250 for the same type of a rental car.

Nicknamed as ‘the French Rome’, due to its many well preserved Roman monuments, Nimes is haven for the ancient history lovers. The Roman Amphitheatre of Nimes, although not the largest one, is one of the best preserved structures of that kind. So is the case of the Roman temple known as Maison Carrée. In recognitions of the historic importance of these, as well as others monuments of Nimes, the proposal to submit the city as a candidate to UNESCO World Heritage sites was placed.

The Nimes Arena, which is how the amphitheatre is called, is a venue for a renown international music festival.  David Bowie, Metallica or Muse were some of the artists to perform at the Nimes Festival in the past.

Find out more about the Nimes attractions: