Newark Liberty Airport - EWR is one of the three international airports serving the metropolitan area of New York, together with La Guardia and JFK. See New York airports location map.

Located in New Jersey, Newark Airport is the oldest air field of the United States and, in fact, the county’s first major international airport.

However, thanks to the extensive choice of domestic and international routes as well as proximity and easy access to New York city centre, Newark Liberty continues to be a favourite destination for many passengers flying to New York.

Find below useful information about Newark Airport including advice on car hire and other transportation solutions for transfers from EWR airport to New York city centre.

Newark Airport airlines and destinations - flights from Europe to New York-Newark
Newark Liberty Airport is a major hub for United Airlines, the leading carrier of New York market. United Airlines operates a large share of all the international routes at Newark Liberty, including destinations in Europe, South and Central America, Middle East, Japan.

The most popular European destinations at Newark Airport are London and Frankfurt although it is also possible to fly to New York Newark from Amsterdam, Paris, Munich, Zurich, Lisbon, Madrid, amongst other airports in Europe.

The terminals named A, B and C consist of three concourses each. All international flights to Newark Airport arrive at the Terminal B.

See map of gates and concourses of Newark Airport terminals A, B and C.

New York Newark Airport location and distances
Newark Liberty Airport is located in the outskirts of Newark, in the state of New Jersey, approx. 15 miles south-west of Midtown Manhattan in New York City.

The airport is well connected to major roads, amongst them Interstate 78 and Interstate 95 providing access to New York center, Manhattan. A major freeway Pulasky Skyway is also a convenient way of traveling from Newark Airport to Manhattan.

The approximate road distances from Newark Airport to major points of interest in New York area are:

Newark Air Train
The AirTrain is a quick and affordable way of travelling from EWR to the major transportation hub of New York, the Penn Station, where other transportation systems of New York are available, amongst them NYC Subway (A, C and E lines) and PATH and LIRR trains. An important note for the first-time visitors to New York: it is important to distinguish between Newark Penn Station and Manhattan Penn Station. When taking the AirTrain from Newark Liberty to Manhattan, do not get off on Newark Penn Station.

The AirTrain can be also used for moving within the airport as it connects all terminals, hotel shuttles’ stops, central parking area and car hire facilities of Newark Liberty.

Bus from Newark Liberty Airport
New Jersey Transit (NJT) Corporation provides public bus service from Newark Airport to Newark Penn Station connecting with PATH trains to Lower Manhattan. This solution, however, implies changing means of transportation, which may be inconvenient when travelling with a lot of luggage.

Private shuttle Newark Liberty
There are several companies offering frequent private transfer service from Newark Airport to popular Manhattan locations, or even a door-to-door service, amongst them: Newark Liberty Airport Express, Go Airlink NYC or Supper Shuttle. Not all of private transfer companies require reservation although in most cases early booking and pre-payment save money and time.

Taxi from Newark Airport to Manhattan
Taxi ranks can be found in front of every terminal of Newark Airport. However, taxi fares for a ride to Manhattan can be quite expensive as the toll charges and additional charge for heavy luggage are added to the metered rate.

Newark Airport car hire - compare prices and book in advance with Cartrawler
Car hire with the pick-up from Newark Airport is a convenient solution for visitors to the metropolitan area of New York or to the state of New Jersey, when covering large areas is involved. Driving in the very center of New York however can be a hassle, as the city is known for intense traffic and shortage of parking space.

Newark Airport car rental area is well signposted and easily accessed via AirTrain from any part of the airport.

In order to be able to enjoy the best rates of Newark Liberty car hire it is recommendable to book your rental vehicle well in advance. Internet search engines of car hire, amongst them Cartrawler, allow you to compare prices and rental conditions from all the major rent-a-car suppliers at Newark Liberty. Additionally, rates available online are often much more competitive than when hiring a car directly at the counter.

Usually, the cheapest rental cars at Newark Airport (EWR) can be found on Cartrawler with prices starting from around £140 for a week hire of an economy class vehicle, such as Toyota Yaris, Ford Fiesta, or similar. Opting for the cheapest/lowest class of rental cars in the US hardly ever pays off, as the difference in price to larger and more comfortable vehicles in higher classes is usually insignificant. America is a country of large cars and those come here in a variety of makes and models, at affordable rates. 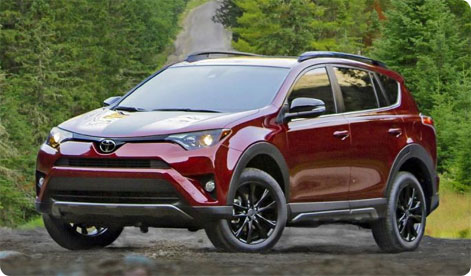 Toyota RAV4 SUV, for an enhanced driving experience – to rent from, for example, Europcar at Newark Airport.

For only a little more, approx. £150-180 for a week, typical American makes and models, for example a Dodge Stratus, an Oldsmobile Alero or a Pontiac Grand Prix are available for hire in Newark Liberty through Cartrawler.

MPV, van and minibus hire at Newark Airport
Larger groups of travelers arriving at Newark Airport can choose from a variety of rental minivans/MPV, for example Chrysler Voyager or Dodge Caravan.

Prices of the cheapest 7-seater for hire from Newark Airport start from around £350 for a week, when booked in advance. 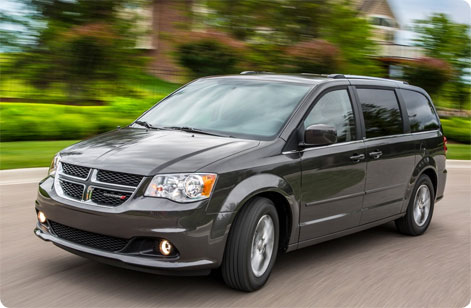 Dodge Grand Caravan, a spacious 7-seater (MPV), in the fleet of most car rental companies at Newark Airport.

Please note that it is not uncommon to find in the United States offers of high passenger capacity vans as rental vehicles. On Cartrawler, offers of a Ford Clubwagon or a similar vehicle, with space for 12 passengers, can sometimes be found with prices starting from £370 for a week of Newark Airport car hire.

Unlike in the UK, in the United States a standard drivers license is sufficient to drive a vehicle with capacity for up to 15 people. You can find more information about the drivers license requirements under  ‘Rental conditions’ of every offer on Cartrawler.