Multiple reasons bring visitors to the city of Milan in the Lombardy region of Italy. Apart from being a versatile tourist destination, Milan is also a dynamic economic centre, the capital of Italian fashion and home to two major football teams A.C Milan and F.C Internazional Milano (Inter).

Italy’s second most populous metropolitan area, Milan is situated in one of the best developed areas of Europe in terms communication network. Three large international airports serve Milan, in addition to road and high-speed rail connections.

If you are travelling to Milan by air, find below useful information on Milan-Linate, Milan-Malpensa and Milan-Bergamo (Orio Al Serio) airports. 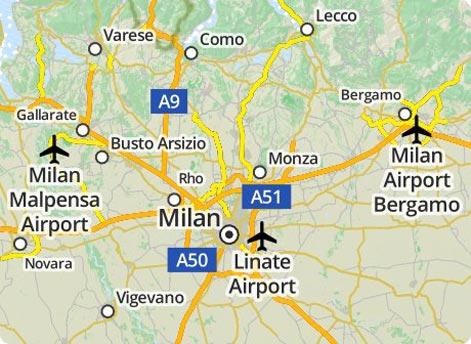 Although when booking a Milan hire car you may be handed an Italian-made Alfa Romeo Giulietta or a Fiat Bravo, the rental car fleet in Italy consists mainly of German and French cars. The most popular models of mid-range hire cars in Italy are 5-doors Ford Focus, VW Golf, Opel Astra and Renault Megane. From 2014 onwards, the new Peugeot 308 - the strongest competitor to VW Golf in the small mid-range class (also called C class or compact class) is likely to become popular in the Italian car hire fleet.

Peugeot 308 model 2014 - a worthy competitor to the VW Golf in the small mid-range of family cars.

Mercedes, which has been trying to strengthen its position in the car rental market for small family cars, turns often to be less competitive due to the relatively high prices. Mercedes A-Class, Audi A3 and BMW 1-series, often considered prestige cars in the mid-range class are almost always more expensive than their less prestigious counterparts.

Formerly a hub for Alitalia, at present the airport is an important base for the low-cost carrier Easyjet, which operates at a dedicated terminal (T2 or ‘Easyjet Terminal) at Milan Malpensa Aiport.

Milan Malpensa offers good links to the British capital, with London-Gatwick as the fourth most popular international route. By early 2014 UK flights to Milan Malpensa were available with the following airlines:

Malpensa Express to Milan
One of the fastest (and cheapest) ways of travelling between the airport and the city is onboard the Malpensa Express train, which runs between the Terminal 1 of Malpensa Airport and Cadorna and Central Stations in Milan. The trip takes approx. 50 minutes and the cheapest one-way fares start from €7. Discounts are available on group/family trips. Find more information on Malpensa Express and book tickets online.

Malpensa Shuttle
Similarly priced are Malpensa shuttle transfers to Milan city centre. A large choice of private shuttle is available in the arrivals hall and in front of the terminal buildings of Milan Malpensa. Although usually previous bookings are not required, to avoid unnecessary hassle (and sometimes overpaying) you can book your shuttle trip in advance. Here is an example of a Milan Malpensa Airport shuttle operator.

Malpensa Airport taxi
Taking a taxi from Malpensa to Milan is a good solution only when the bill can be split between two or more passengers; due to the considerable distance between the airport and the city centre, the fare is quite high, often rounding €100 (£85).

See map of road access from Malpensa Airport to Milan.

If Malpensa Airport car hire is your option for further travel in Milan, it will take at least 30 minutes with favourable traffic conditions to drive from the airport to the city centre.

Since its introduction in 2008, Fiat 500 has been a great success across whole Europe, also not a novelty anymore, it continues to be extremely popular rental model in Italy. Its only disadvantage is the rather limited space. If you are more than two people, hiring Fiat 500 for a holiday trip is not the best of ideas. The trunk capacity of Fiat 500 is only 185 litres which means you may often need to transport that last bag on the back seat. 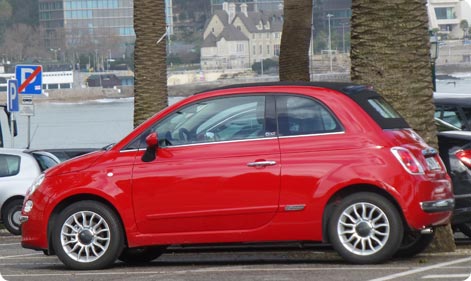 The city of Turin, for example, can be accessed from Milan Malpensa Airport via the A4 motorway link. The distance to cover is of approx. 85 miles.

Much closer, in approx. 40 minutes and 35 miles drive from Malpensa Airport is the famous Lake Como, known for its unpaired natural beauty and privileged location at the foot of the Alps. Many of the quaint villas on the shores of Como are owned by famous and wealthy people, amongst them Richard Branson, Madonna and George Clooney. The most popular towns and resorts of Lake Como are Bellagio, Varenna, Lecco and Como town.

Flights London - Milan Linate
Linate Airport is the primary airport for domestic flights to and from Milan, with Rome-Fiumicino, Catania (Sicily) and Naples as the most popular domestic destinations.

International routes from Milan Linate are available to major European capitals, amongst them Paris, Dublin, Amsterdam and London. Codeshare flights from London-Heathrow to Milan Linate are operated by British Airways and Alitalia.

Low-cost carrier Easyjet is present in Linate with a route to London-Gatwick.

Linate Airport to Milan city centre
The access from the ‘city airport’ Linate to central Milan is very easy. Arriving passengers can chose from a wide range of bus services provided, taxis or private shuttles.

The city bus #73 from Linate to Milan (Piazza Santa Babila) is the cheapest solution, with fares starting usually from €1,5 per person. The bus runs every 10 minutes, but stops frequently before reaching the city centre. Much faster is the dedicated Linate Airport bus which reaches Milan Central Station after 30 minutes, with only one intermediate stop. The fare is €5 per person.

Private transportation services from Linate to Milan are substantially more expensive, with an average price at approx. €45 for small groups (up to 3 people). The taxi fare between Linate and central Milan varies between €15-20. (All quoted prices valid per early 2014)

If Milan is not your primary goal from Linate Airport, the A51 motorway bypassing the city on the east provide access from the airport to the A4 motorway crossing the northern part of Lombardy, as well as to A1, leading to Piacenza, Parma, Modena and Bologna southeast of Milan. If you are driving from Linate Airport to Genoa, on the coast of the Ligurian Sea, the distance to cover is approx. 90 miles (1h 45min by car).

Recommendation Italy car hire: rent a bigger car (station wagon) for a reasonable price
If you are on holiday trip around Italy a slightly larger car is often the best solution.

With 4-5 people, a small station wagon hire car in Italy offers the most comfort of travelling, for considerably less money than a minivan (MPV) 5+2 or 7-seater would cost you. 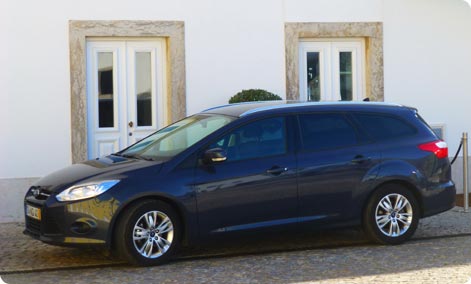 While it is possible to make transfer between Linate and Malpensa Airports relatively cheap by combining different transportation systems, usually intersecting at Milan Central Station, it is often a troublesome solution, especially when travelling with a lot of luggage. Hassle-free taxis, on the other hand, come at a cost, sometimes exceeding €100 on the route between the two Milan airports.

If you are not in a hurry to get to Malpensa from Linate, or vice-versa, consider a short-term, one-way car hire as a mean of transportation. Although in many cases, the additional charge for one-way rental may increase considerably the total cost of your car hire, in Milan it is often possible to rent a car at one airport and deliver it at another without a significant difference in price.

Prices of short term, one-way rentals in Milan Airports are especially competitive during the low-season. Offers of one day hire from Linate Airport, with drop-off at Milan Malpensa starting from around £25 are not unusual in winter or early spring. For this price you can have a small city car, such as Fiat Panda or similar, to take you from one airport to another. If you are travelling in a larger party, or with a substantial amount of luggage, a larger car to rent for transfers between Milan airports is a more comfortable and not necessarily much more expensive solution. A VW Golf, or similar car of the compact class can, sometimes, cost as little as £30 for a short-term rental for transfer from Malpensa to Linate. All the above prices include insurance.

See map of major road links between Malpensa and Linate airports in Milan.

Bergamo Airport is known for the large selection of low-cost carriers, being the major ones Ryanair and Wizzair. Charter flights and leisure flights to tourist destinations across Europe and northern Africa represent a big part of all the operations at Bergamo Orio Al Serio.

Between all the airports serving the area of Milan, Bergamo Airport offers the largest selection of UK routes, with regular and seasonal flights from Birmingham, London-Stansted, Manchester, Bristol, East Middlands and Leeds/Bradford.

Transportation from Bergamo to Milan
A number of transportation solutions are available at Bergamo Airport, depending on the travellers’ budget.

One of the most popular (and cost effective) ways of getting from Bergamo Airport to central Milan is via one of the many dedicated bus links provided.

Bergamo buses to Milan depart frequently – every 20 minutes during day time - however, during the high season you may be required to queue for a while in order to get on board. Please note that the tickets (price varying between €5 and €10) are not sold on the bus, but in the kiosks inside the terminal. Here is an example of a bus company operating at Bergamo Airport.

Another inexpensive, yet probably not the most comfortable solution, to take a local bus to Bergamo railways station and catch a train to Milan Centrale.

A taxi from Bergamo to Milan is a costly affair, with prices well above €100.

Bergamo Orio Al Serio Airport is located right next to the major motorway A4 which bypasses Milan in the north. In normal traffic conditions it will take approx. 45 minutes to transfer between Bergamo and Milan, however, with the sometimes heavy traffic on A4 more time might be needed.

Please note that, given a considerable distance between the airport and Milan city centre, the prices of one-way rentals from Bergamo-Orio Al Serio are not as competitive as in case of Malpensa and Linate airports.

Bergamo tourist attractions
With an Orio Al Serio hire car at your disposal take the opportunity to explore Bergamo, before heading off to Milan. The second most visited city of Lombardy, after Milan, Bergamo boasts an interesting cultural and historic heritage.

Most of the historic landmarks of Bergamo are found in the medieval ‘Upper City’ (Città Alta) and the 19th century Downtown (Città Bassa), connected by a funicular/cable car). See map of Bergamo city centre.

A number of other places of tourist interest are locate within a comfortable drive distance from Bergamo Airport. See the approximate road distances below:

Genoa, Parma and Turin Airports close to Milan
For the tourists arriving from the UK who would like to get to know better northern Italy and who enjoy driving, the airports of Genoa, Turin and Parma are a viable alternative for flying to Milan.

All three airports are located in less than 100 miles distance from Milan and operate routes to and from United Kingdom.