A large part of all UK flights of the major low-cost carrier Easyjet depart from London-Luton Airport. Other cheap airlines, Ryanair and Wizzair, have also made themselves at home in Luton.

The growth of budget air traffic at thisairport has managed to revive the old, industrial city of Luton. Nowadays Luton, although rather poor in charms of a typical tourist destination is an important gateway for air traffic to London.

Luton Airport – LTN is located in a little over 2 miles west of Luton city centre and in approx. 30 miles northwest of central London, thus the name, 'London-Luton Airport'. Passenger travelling to London via Luton Airport should be prepared, however, that covering the considerable distance separating the airport from London takes at least one hour drive, by the M1 motorway easily accessible from the airport. On the occasions when the M1 is (totally or partially) closed, due to accidents, which seem to happen quite often, arriving to Luton Airport on time to board a flight might be somewhat a challenge. It is always advisable to allow more than sufficient time to arrive to Luton Airport from London. See map of road network in Luton Airport area.

Another major road in proximity of Luton Airport is the A1.

Arriving at and departing from Luton Airport:

Traveling to and from Luton Airport - ground transportation
A convenient and quite popular way of traveling from Luton to London or other destinations in England is car hire with the pick-up at the airport.

Luton Airport car hire centre, located in some distance from the terminal can be reached by a free shuttle bus service provided with a stop right in front of the arrivals terminal.

When returning a rental car to Luton Airport car hire centre, please remember to fill the tank if your rental contract states ‘pick-up full/return full’ fuel policy. Skipping this step may turn out to be quite costly as car hire companies apply quite steep charges for missing fuel. Not many gas stations are available in Luton Airport area. You will find one driving towards the town of Dunstable (by Tesco store).

Moreover, it is also possible to use a free shuttle bus to Luton Airport Parkway Train Station with train links to London and to Gatwick Airport, which also operates many Easyjet routes. Tickets for the train can be purchased at Luton Airport. It is worth to remember, though, that the UK railway system is known for delays or cancellation of train services and always sufficient time should be allowed for transfer between London airports. A train ticket from Luton to Gatwick, for example, costs from around £26. Also, passengers who opt for leaving their cars in Luton Airport parking area should consider the distance separating parking from the terminal.

A Ford Fiesta, or a similar rental car of a super-mini class, with 5 doors and air condition can often be found with prices starting from around £80 for a week of Luton Airport car hire.

If you wish to join the green movement in car hire or are simply interested in driving a hybrid car, offers of a Toyota Prius are sometimes available at Luton Airport with prices starting from around £220 euros for 7 days car hire. 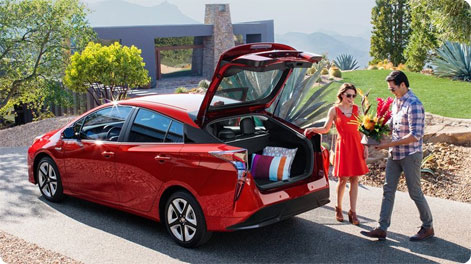 London-Luton MPV car hire
If you are travelling in a larger group and need more space or/and passenger capacity, a VW Touran, a Opel Zafira, or a similar MPV (minivan) can be rented at Luton Airport for a very affordable price. Rates starting from approx. £300 for a week car hire of a minivan in London-Luton are not unusual.

Luton to Stansted Airport – one way rentals
Another popular London airport, Stansted, is in approx. 55 miles distance from Luton, if you choose the easiest route by the M25 London Orbital motorway. With favourable traffic conditions, the journey takes just over an hour.

The cost of delivering a Luton Airport hire car in another London car rental location is relatively small and on some occasions, especially during the night hours and when more than  one passenger is travelling, it pays off to use a hire car for moving between London airports, instead of a taxi or public transportation.

Opel Vivaro minibus will accomodate up to 9 people; availbale in the fleet of Sixt at Luton Airport, amongst other car rental companies.

As an alternative, you can use a National Express bus company with over 25 daily runs between Stansted and Luton Airports. It is a good idea to book bus tickets in advance in order to benefit from the best deals.

Luton Airport low-cost airlines and destinations
Luton is a major base for Easyjet and this low-cost carrier offers the widest choice of both domestic and international routes in Luton. Easyjet’s cheap flights from London-Luton include destinations in Spain, Portugal, Greece, Turkey and Italy, among others.

Wizzair, Ryanair, Vueling and Blue Air are other low-cost carriers at Luton Airport. It is worth noting that Luton Airport is a major destination for flights from Eastern European countries, such as Poland, Czech Republic, Romania, Bulgaria and Hungary.