Cadillac CTS is one of the more unusual rental cars in Islip Airport (from Avis Rent-A-Car):

MacArthur Airport – ISP is one of the four airports serving Long Island. While the much larger JFK and La Guardia Airports, both located in Queens, are a convenient destination for passengers travelling to New York, MacArthur Airport serves primarily the counties of Nassau and Suffolk. See map of Long Island counties. The fourth airport of Long Island is situated at the island’s eastern tip, in East Hampton.

MacArthur Airport is located approx. 9 miles (by road) north-west of Islip town, in Suffolk County, being of the referred to by its former name, ‘Islip Airport’.

The distance from Long Island Airport to Manhattan is around 50 miles.

As you may see by comparing offers online, rental cars at MacArthur Airport are often considerably cheaper than at other large airport in the area, namely at JFK or LaGuardia. The cheapest offers often start from around £130 for a week car hire in economy class (at Mac Arthur Airport it is usually a Hyundai Accent or a Chevrolet Spark).

If you are looking to rent a larger car at Long Island Airport, competitive car hire deals are also available on Cartrawler in other rental classes: Intermediate, full-size and SUV. For larger groups of travellers, people carriers, such as Dodge Caravan, Chrysler Town and Country (or similar) with seating for 7 people are usually very reasonably priced from around £230 for a week. 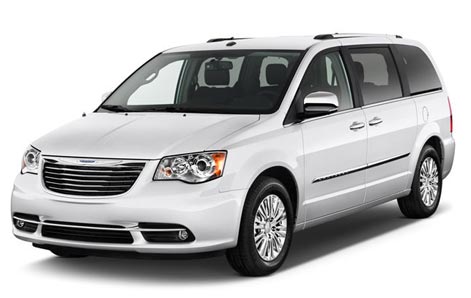 Chrysler Town and Country - a popular rental 7-seater in the US; in the fleet of National Car Rental at Long Island Airport

Also in the segment of luxury cars to rent at long Island Airport, Cartrawler can often offer very attractive prices. Browse through the list of car hire deals displayed (or use a filter option) to find the best deals on Cadillac CTS or Lincoln MKS MacArthur Airport car rental, often with unlimited mileage and zero excess.