Hire a car in Geneva - Compare prices with Cartrawler

Geneva Airport - GVA is the second largest international airport in Switzerland (after Zurich Airport) and also serves a purpose for those travelling to the south-east of France.

From Geneva Airport, located in the French speaking region of Romandie in Switzerland, the distance to Grenoble is about 80 miles, by road: 85 miles separate Geneva Airport from Lyon in France. 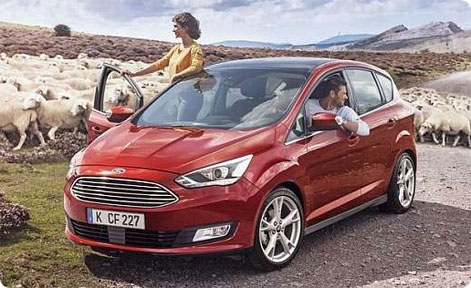 Cheap 5-seater with plenty of space - Ford C-Max from Budget, amongst other car rental companies at Geneva Airport.

Geneva airport is also known as Geneva Cointrin International Airport. A large proportion of the passengers travelling via Geneva airport are affiliated or connected in some way to one of the many international organisations in Switzerland with their head office in Geneva, amongst them UNO, Cern, ICRC (Red Cross), UNHCR (UN refugee agency), Amnesty International, UNICEF, WHO amongst others.

Car rental companies GVA – low-cost Flizzr and luxury King Rent
A fairly large number of rent-a-car companies operates at Geneva-Cointrin Airport. Amongst them are:  Alamo, Avis Rent A Car, Dollar, Budget, Europcar, Hertz, Sixt and National. It is also possible to book cars at Geneva Airport from the fairly new supplier, Flizzr, which is a low-cost operation of Sixt  and, on the more expensive end, from the prestige car rental company King Rent. The offers on Porsche Cayenne, Land Rover, Range Rove and other luxury brands from King Rent are pricey. It is often possible, though, to find interesting offers on premium car hire - for example Audi Q5 - from Europcar at Geneva Airport.

The increased competition between rent-a-car’s in Geneva seems to have a positive effect on the rates and in the most popular classes - economy and compact - well priced offers are often available.

Do book your Geneva Airport rental car early though for the winter season. Geneva is an extremely popular base for ski holidays in both Swiss and French Alps and in the winter cars may be in a short supply in this location.

Internet search engines, such as Cartrawler, are a convenient tool facilitating price comparison from many major rent-a-car providers in a chosen destination. Besides the prices of Geneva Airport hire cars, you will be able to compare through Cartrawler also rental conditions, which may differ significantly from a supplier to supplier.

For example, the unlimited mileage, which seems to be a common policy in a majority of Geneva Airport deals, does not necessarily extend to the more expensive cars; read the rental conditions in advance if planning long trips.

The French and the Swiss sectors at Geneva Airport
Geneva Airport, located along the border between Switzerland and France, is often used interchangeably by passengers travelling to either of the two countries. The airport is divided in two sectors, the French and the Swiss one and car hire is available at both of them. In the Swiss section, the desks of car rental companies are located in the arrivals hall; in the French section, the passengers will find them in the upper (departure level).

When booking a car at Geneva Airport via Cartrawler, it is necessary to indicate in which sector the car will be picked up and returned. Both sectors are marked by small national flags - the French and the Swiss one - in the list of suggested rental locations in the search engine.

It is, naturally, possible to drive a car rented in the French sector to Switzerland and vice-versa (unless indicated otherwise in the ‘Crossborder travels’ section of Rental conditions). Remember however to return the car in the sector when it was picked up, in order to avoid additional charges.

Also, usually there are no significant differences in price of car hire between the two sectors.

Rent A Car Geneva Airport - prices
Smaller cars, in Ford Fiesta class, with space for up to 4-5 people are usually available from about £170 for a week of Geneva Airport car hire. Occasionally, a considerably larger Ford C-Max can be rented for about the same price as the Fiesta.

The best deals, however, are found in the class of larger vehicles (full size), such as for example Opel Insignia / VW Passat, often priced from about £220 for a 7 day rental.

Minibuses and MPV are usually expensive to rent in Geneva. A VW Touran or similar (5+2 seats) can, on occasions, be booked for £280-300 for a week, but such an accessible price is a rarity. 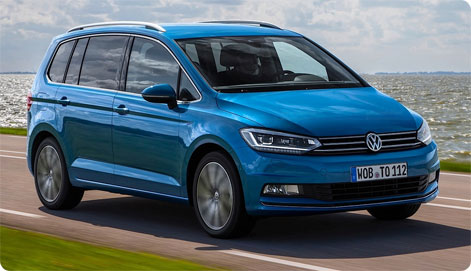 The newest version of VW Touran is a great improvement to the old model - but still with limited luggage space when all 7 seats are in use.

Larger MPV cars, such as full-size 7-seaters - Ford S-Max, VW Sharan, or similar -  are rarely available for less than £400 for a week. Those are, however, the only viable option for larger groups of people travelling with a significant amount of luggage, as they don’t require a compromise between passenger space and luggage capacity.

The offers on smaller prestige cars, for example BMW 3 Series or a Mercedes C-Class, starting from about £300 are not unseen on Cartrawler (outside high-season).

It is a requirement in the majority of Geneva Airport car rental deals that the driver has held the driver’s permit for at least 2 years. In some of the cheaper offers from Budget, only 1 year is required.