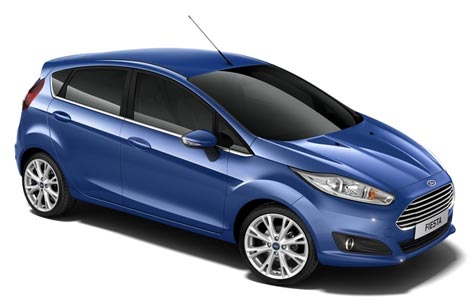 Ford Fiesta, a popular rental car in economy class, available from, for example, Avis Rent A Car at Prestwick Airport.

Cheap car rental Glasgow-Prestwick
Outside summer season the cheapest hire cars at Glasgow-Prestwick Airport are usually available from around £90-100 for a week. Although a small city car - Peugeot 107, Fiat 500 or similar - are the most frequent options in this price range, the offers of considerably larger and more comfortable economy class cars to rent at Prestwick Airport can often be found on Cartrawler at roughly the same rate.

Well priced car hire deals in Glasgow-Prestwick are not unusual also in the superior rental classes. Scroll down the list of offers displayed by Cartrawler or use the filter function of the search engine to view offers of estate cars, 7 or 9 seat people carriers or luxury/premium cars to rent at Prestwick Airport.

Compare rental conditions - mileage policy Scotland
In order to choose the most competitive Glasgow-Prestwick rent-a-car deal, compare not only the price, but also rental conditions, described thoroughly in a dedicated section of each offer presented on Cartrawler. Some aspects of the rental conditions may influence the final cost of the rental, which is the case of, for example, mileage policy. Some of car rental offers for Prestwick Airport have limited mileage; if you are planning to drive a lot in your Glasgow hire car, opt for the deals with unlimited free miles.

About Prestwick Airport - Ryanair in Glasgow-Prestwick
Prestwick Airport- PIK is one of the two international airports serving Glasgow metropolitan area. Having currently (2015) Ryanair as its sole airline, Prestwick Airport is regarded as Glasgow’s low-cost airport. It is located approx. 33 miles south-west of Glasgow city centre, near the town of Prestwick - see map.

The route Glasgow-Dublin, once one of the busiest routes served by Ryanair at Prestwick Airport, was moved in late 2014 to Glasgow International Airport (GLA).

Prestwick Airport, the largest commercial airfield in Scotland is a regular venue for air shows.