Travelling to the Bordeaux wine region? Find the most competitive deals on car hire Bordeaux online, with the help of Cartrawler search engine.

The fifth busiest French airport is found in the south-western region of France, Nouvelle Aquitaine, approximately 7 miles west of the city of Bordeaux. 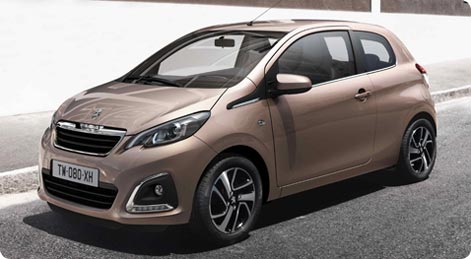 Peugeot 108, a cheap rental car available in most destinations in France.

Due to the location in the Mérignac commune, the airport is officially known as Bordeaux-Merignac Airport – BOD.

The proximity to the motorways network allows a quick access from the airport to Bordeaux itself, as well as to major cities in the region: in the south direction the A63 leads to Biarritz and the A62 to Toulouse; the A10 also easily accessible from the airport connects to Poitiers and, further north, to Tours. See Bordeaux Airport location map.

Whether your final destination is Bordeaux or planning to travel within the region, consider renting a car at the airport. With a vast choice of on-site rent-a-car companies, advantageous car hire deals are often available even in the high season. For best rates, book in advance and after having compared offers from different car rental suppliers.

All of the above mentioned car renters operate directly at the airport. Their desks can be found in the connecting wing between the terminals A and B. This means a fairly comfortable car rental experience, with no need for shuttle transfers to off-site locations.

What are the cheapest cars to rent in Bordeaux?
Please note that often there is a very small difference in price between the smallest city cars and the segment above – the economy class.

When searching on Cartrawler for Bordeaux Airport car rental deals, you may often notice that the mini-class cars, in Bordeaux them being usually Peugeot 108, Renault Twingo, Toyota Aygo, Ford Ka or similar, are only a few pounds less expensive than the cheapest economy class cars. Whenever there are more than two people travelling, a Fiat Fiesta, a Peugeot 208 or an Opel Corsa will surely be a much better choice, comfort of travel wise.

Bordeaux Airport car rental: a minibus is not easy to find in Southern France; above a Renault Trafic 9-seater.

Larger groups of travellers should reconsider whether it pays off to rent people carriers in Bordeaux. Two regular passenger cars may often end up to be significantly cheaper to rent than a minibus.

The airport is an important base for Volotea, a Spanish low-cost carrier. Easyjet, Ryanair and the French flag carrier Air France are amongst other major airlines offering routes to Bordeaux.

From the UK it is possible to fly to Bordeaux with British Airways, Easyjet and Ryanair.

The airport consists of three terminals: terminal A serving primarily international flights, terminal B used by Air France and the so called terminal 'billy', designated for low-cost airlines.