Serving over 45 million passengers per year, London Gatwick Airport – LGW is the second largest airport of the UK, after London Heathrow. It is situated approx. 28 miles south of London, benefiting from good road access to the city centre as well as to the M25 ring road encircling the British capital.

See map of road access from the the airport to M23.

Please note that the motorways in Greater London area are amongst Europe’s most congested roads; when travelling to or from the airport, always allow an extra time for possible delays. 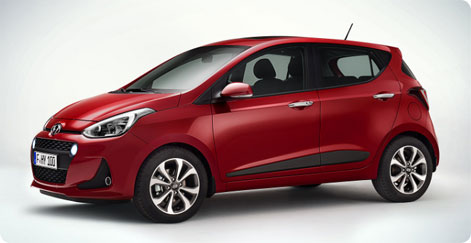 The Hyundai i10 - often the cheapest rental car in Gatwick Airport (from Interent, Easirent amongst others)

Travellers arriving at the airport have at their disposal a wide selection of car hire providers whose car rental deals can be easily compared and booked online via internet search engine of car hire Cartrawler.

Cheap car hire Gatwick Airport
Due to the fierce competition between rent-a-car operators, it is sometimes possible to find fairly cheap airport car hire deals, with prices starting from around £50 for one week rental of a small city car (off season). In Gatwick, as well as in other London airports it will often be a Hyundai i10, a Fiat 500, or similar.

In larger and more comfortable rental classes, the popular VW Golf (compact class) is often available to rent from approx. £70 for a week (sometimes also with a Diesel engine for the same price).

When a larger hire vehicle is required, a VW Touran is often the cheapest option for airport minivan car hire. A VW Touran offers space for up to 7 people on 5 regular seats and 2 folding seats in the third row (5+2 configuration). Since the use of all 7 seats compromises considerably Touran’s luggage capacity, a full-size 7-seater, such as for example a Ford Galaxy, is often a better choice. 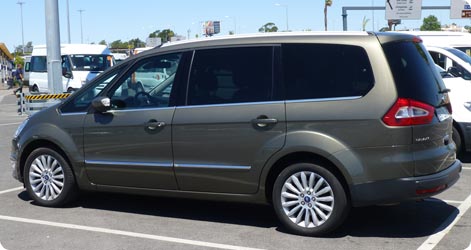 Cartrawler search engine displays competitive deals in a wide range of rental classes, including luxury/premium hire cars. Offers of a BMW 3 Series, a Mercedes C-Class or a 4-wheel drive BMW X3 starting from around £300 for a week car hire with pick-up and drop-off at Gatwick Airport are not unusual on Cartrawler. 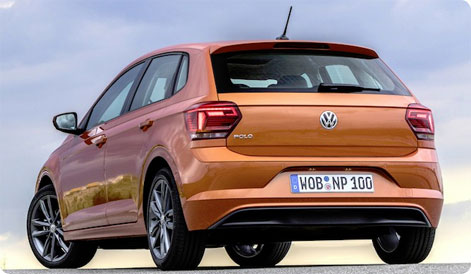 VW Polo is one of most popular economy cars to rent in London. 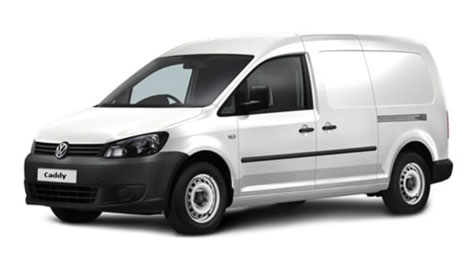 Airlines and destinations
Used by over 50 airlines (regular, low-cost and charter), Gatwick Airport is an important base for scheduled carriers as British Airways, Easyjet, Norwegian, Virgin Atlantic as well as for the charter airlines TUI and Thomas Cook Airlines. Ryanair's and Wizzair's presence at this London airport is still fairly limited. Amongst other major airlines offering a selection of European and intercontinental routes are Air Transat, Turkish Airlines and Vueling.

The low-cost airline Easyjet, is by far the busiest carrier at the airport, handling nearly half of all the passengers. Easyjet operates flights to a 100 destinations across Europe, being Dublin, Amsterdam, Barcelona and Malaga amongst the busiest ones.

All Easyjet flights arrive and depart from th North Terminal while the much larger South Terminal handles the majority of international traffic, including all British Airways operations.

The terminals are connected by a high frequency, 24/7 shuttle service. It takes approximately 2 minutes to travel between the terminals. In the North Terminal, the inter-terminal shuttle stops in front of “The Avenue” area, at level 1.

In the South Terminal, the shuttle stop is at the Arrivals level, near the airport train station.

Transport to and from Gatwick Airport – transfers between London airports
The airport benefits from a well-developed system of public transportation which allows to travel to the city centre as well as to other airports of London area. See map of London airports.

Transfer from Gatwick to Stansted Airport
The distance between Gatwick and Stansted airports is approx. 75 miles, bypassing London city centre via the M25 ring road. In regular traffic conditions it takes approximately 1.5 hours to drive between the two. It is worth to remember, however, that due to accidents and road-works, the traffic in Greater London is often heavily congested and driving from A to B often takes longer than expected. Travel time increases considerably when you opt for public transportation. The Stansted-Gatwick airport bus operated by National Express takes nearly 3 hours, as the bus stops at Heathrow Airport first. To avoid motorway congestion, you can opt for a train journey from to Stansted. This requires, however, changing trains and involves also a short subway, bus or taxi trip between Victoria Station, where the train from the airport arrives to from and Liverpool Street Station, the terminus of Stansted Express. See also London tube map.

Transfer from Gatwick Airport to Luton Airport
London Luton Airport is located approx. 35 miles north of London city centre. The easiest and fastest way to reach Luton from Gatwick is to take the Thameslink train to Luton Parkway Station and continue further on a shuttle bus to Luton Airport. The bus journey between the train station and the airport takes approx. 5 minutes. The train travel time is usually around 1h20min. It is rather difficult to travel between both airports any quicker, even when driving. With favourable traffic conditions on the M25 and M1 at least 1h 15m are needed, although usually the trip takes around 1.5 hours or more.

Transfer from London-Gatwick to Heathrow Airport
The road distance of approx. 40 miles between Gatwick and Heathrow airports, with favourable traffic conditions can be covered under an hour. Then again, given the notoriously congested traffic on the M25, it is advisable to leave sufficient amount of time for the transfer.

There are no direct trains from the airport Heathrow, but if you don’t mind going into London city centre, it is possible to travel to the Victoria Station on Gatwick Express and then, further on, on board the Heathrow Express from Paddington Station. This is a time consuming solution, allowing you however to see a bit of the British capital, should you have sufficient time between your flights.