Thessaloniki, also referred to as Salonica is the capital of the Greek Macedonia region.

See Thessaloniki on the map of Greece.

A second largest city of Greece, after Athens, Thessaloniki plays an important role for the Greek economy, tourism industry and culture.

Thessaloniki is not only a major transportation hub for Southerneastern Europe and an important commercial port in the Aegean Sea but also a place of rich in historic heritage and a popular tourist destination in continental Greece. In recognition of the thriving cultural life, Thessaloniki was chosen to be the 2014 European Youth Capital.

From Thessaloniki it is only a short drive to the popular holiday resorts of Halkidiki.

Because of its importance in so many areas, the city attracts visitors throughout the year. Whether you are arriving to Thessaloniki as a tourist or in business, find below few useful tips on Thessaloniki Airport car hire.

Thessaloniki Airport (SKG)
The city of Thessaloniki is very well connected to other Greek locations and accessible by road, rail, air and ferry. The Port of Thessaloniki offers plentiful ferry links to the Greek islands on the Aegean, having become an important cruise ship destination in the last years.

For visitors arriving from abroad, the most important gateway to the city and region is Thessaloniki Airport - SKG. The official name -Thessaloniki International Airport ‘Macedonia’ (also spelled as ‘Makedonia’) - replaced the former name Mikra Airport, still in use in Greece.

Thessaloniki airport is located approx. 9 miles south of the city centre, in the municipality of Thermi.

Competitive deals are often available from the local Greek car hire companies in Thessaloniki which deliver rental vehicles to the airport, as for example Auto Union Rent A Car, Salonica Rent A Car, Ride and Drive Thessaloniki Rent A Car, Cars 4U, Olympic, Drive Car Rental Company or Caldera Rent A Car.

While Thessaloniki Airport hire cars are usually available on arrival, it pays off to book in advance, especially if you are travelling to Greece in the summer. Internet search engines of car hire, such as Cartrawler allow you to shop around and compare prices of Thessaloniki car hire at different times of the year.

In April, with fairly good weather and safe from the tourist crowds flooding Greece in July and August, you can often find offers of a one week hire of an economy class car, such as VW Polo, or similar for very accessible prices, starting from £60. The larger and more comfortable compact class, represented by the popular VW Golf is frequently prices from around £80 for a week of Greece car hire with the pick-up at Thessaloniki Airport, provided that you placed your boking well in advance.

Another undeniable advantage of Thessaloniki car hire outside of the busiest summer months is the fairly competitive price of minivan and van rental. A large people carrier, such as Mercedes Vito Traveliner, or similar van with capacity for 8-9 people is often available for hire from Thessaloniki Airport for prices starting from around £ 300 for a week. 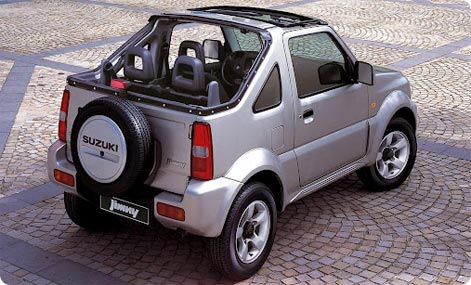 Suzuki Jimny hire car in Greece -  a small, fun, 4-wheel drive convertible for up to 4 people (without luggage).

When booking a Thessaloniki hire car in the summer season, expect much higher prices. Booking well in advance is recommended.

The comprehensive expanssion plan developed  for Thessaloniki Airport aims at upgrading the airport’s capacity to receive larger aircrafts and allow intercontinental flights to this popular tourist destination in Greece in near future.

In early 2016 flights from the UK to Thessaloniki were available with low-cost airlines Easyjet and Ryanair, with British Airways, as well as with the charter carrier Thomson Airways.

Drive from Thessaloniki to Halkidiki
Thessaloniki Airport is a major gateway to the popular tourist area of Halkidiki (also spelled as Chalkidiki) of continental Greece.

Halkidiki is a peninsula in northern Greece, resembling a three fingered hand. Two of its ‘fingers’, Kassandra and Sithonia abound in excellent beaches, offering much easier access than Greek islands resorts scattered across the Aegean Sea.

The distances from Thessaloniki Airport to the closest beach location in Nea Kalikratia in northern Kassandra is only around 19 miles. From there towards east, the coast is spotted with more or less developed resort towns and beaches offering great conditions for a relaxed beach holiday.

Amongst the most popular Halkidiki beaches are: Agios Ioannis Beach, Kaviou, Spathies, Kalogria, Neos Marmaras, Armenistis, Agios Nikolaos, Nikiti and Vourvourou, although it is hard to pick out only few locations worth recommendation. With its incredible variety of beach setting, Halkidiki region caters for most varied tourists' tastes and needs. Since Halkidiki beaches are located in a sometimes very short distance from each other, it is very easy to explore the area in a Thessaloniki Airport hire car.

Apart from stunning beaches, Halkidiki region boast valuable historic heritage. Worth exploring is the region’s capital Polygros and the Byzantine monasteries of Mount Athos, enlisted as UNESCO World Heritage Site. Please note that the access to the ‘Holy Mountain’ is restricted to male visitors only and requires a special permit.

Thessaloniki International Trade Fair
Thessaloniki, a major trade centre of the Byzantine Empire, remains famous for hosting HELEXPO - one of the most important trade fairs in Southeastern Europe.

The expositions dedicated to divers sectors, amongst them construction, environment and transport, culture, technology tourism and food, as well as congresses and accompanying events, are held in the Thessaloniki International Exhibition Centre, located within the city limits.

If you are planning to rent a car in Thessaloniki, be aware that at the time of the most popular expositions, the supply of rental vehicles in the city may be limited. Do book your Thessaloniki hire car well in advance.