Tel Aviv Ben Gurion Airport - TLV is the main airport of Israel and one of two airports serving Tel Aviv.

The airport is named after Ben Gurion, the founder and the first prime minister of Israel.

In Hebrew, Tel Aviv Ben Gurion Airport is often referred to as Natbag, which is an acronym from ‘international airport’. 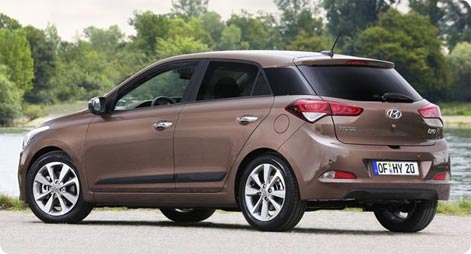 Travellers, who opt for car hire from Tel Avivi Ben Gurion Airport, will find it easy to travel to a variety of fascinating locations in Israel.  It takes less than an hour to drive from Tel Aviv to Jerusalem; other places of interest are at an easy reach from Tel Aviv, too:

Car rental desks are located in Terminal 3, on the first floor of the Greeters’ Hall. There you will find the counter of Avis Rent A Car, Budget, Dollar Thrifty, Eldan, Europcar, Hertz Car Hire Israel and Shlomo Sixt.

Other car rental companies which don’t have offices at the airport, as for example Cal Auto, provide services at Tel Aviv Ben Gurion on 'meet &greet basis'.

Tel Aviv is not the cheapest place to rent a car and you will rarely ever find any offer below £100 for a week of Ben Gurion Airport car hire. For this prices usually only the smallest city cars, for example a Suzuki Alto, a Hyundai i10, Nissan Micra, Fiat Panda (or similar) are available.

If you are looking to travel in more comfort, do consider renting a larger vehicle from the economy class – in Tel Aviv often a Ford Fiesta, a Hyundai i20, a Chevrolet Aveo or similar – as there usually will be only a small price difference when compared to the cheapest rental cars in Israel.

Internet search engines of car hire, such as Cartrawler, display offers from all the major car hire companies at the destination of your choice, including TLV airport. The prices available online are often more competitive than when hiring directly at the counter of a car hire company. Also, extras are sometimes included in the rate quoted by the search engine. In Tel Aviv Airport car hire it can be, for example the option of a free additional driver.

Within the minvan category you will find small MPV, of the 5+2 type, amongst them Opel Zafira, Mazda 5 or Mitsubishi Grandis with capacity for 7 people and a limited amount of luggage with full passenger occupancy. 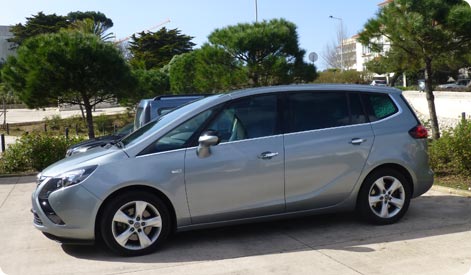 Much more spacious are full-size 7-seaters, such as Ford Galaxy, or similar, which allow for up to 7 people to travel comfortably having still a reasonable baggage space.

Usually, the prices of the cheapest hire minivans at Tel Aviv Airport start at around £300 for a 7-days rental period.

Terminal 3 TLV
Inaugurated in 2004, the large and modern Terminal 3 is Israel’s main international gateway.  With capacity to receive 10 million passengers per year, the Terminal 3 is very spacious, offering a vast choice of passenger services, amongst them a small shopping centre, known as Buy & Bye.

There are three concourses at TLV Terminal 3, named B, C and D, comprising the total of 30 gates. The planned addition of two new concourses is expected to increase the airports capacity to 16 million passengers per year.

The terminals of Tel Aviv Airport are connected by shuttle busses.

Although Israel’s largest city and capital is in Jerusalem, Tel Aviv is considered the country’s financial centre. Due to the ongoing conflict with Palestine and the fact that United Nations do not recognise Jerusalem as the official capital of Israel, many embassies are located in Tel Aviv and so are headquarters of international companies in Israel.

The history of Tel Aviv dates back to the early 11th century when a town was founded on the outskirts of Jaffa port city. Shortly after the founding of Israeli Independent State in 1948 and due to the rapid development, Tel Aviv and Jaffa merged forming one municipality, locally referred to as Tel Aviv-Yafo.

The city build on sand dunes, unviable for agriculture, developed over the year within areas as business, education, science and culture. Nowadays, Tel Aviv has the second highest per capita income in the Middle East (after Dubai) and a dynamic economy, characterised by the culture of 24/7 service (meaning permanent availability of commercial and some public services).

Tel Aviv’s university, research institutes and cultural scene are thriving. And so is the city’s night life: Tel Aviv is often referred to as ‘the city which never sleeps’.

Tel Aviv’s modernist neighbourhood known as White City is inscribed on the list of UNESCO World Heritage sites and in the old centre of Jaffa tourists will have a chance to visit plentiful historic monuments.

The network of flights available to and from Ben Gurion Airport covers major airports in Europe, Middle East and Asia.