In northern Germany you will find an interesting selection of airports operating low-cost flights on international routes. With a well-developed network of motorways and easily accessible car hire, it is very easy and often inexpensive to continue your trip in Germany or even abroad.

Find below useful information about car hire from Bremen Airport, in northwestern Germany.

Car hire companies in Bremen Airport - compare prices with Cartrawler Germany
Car hire at Bremen Airport is available from both on- and off-site providers.

In the dedicated car rental facility, located in front of the Terminal 2, passengers arriving at Bremen Airport will find car rental desks of Avis Rent A Car, Europcar, Hertz Car Hire Germany, Enterprise Rent A Car and Sixt Mietwagen Bremen.  Amongst the car hire companies providing services at Bremen Airport without having their offices are the well-known rent-a-car brands, Alamo and Budget, as well as the German provider Caro Autovermietung.

The best car hire deals at Bremen Airport are frequently available online, via internet search engines of car hire, such as Cartrawler, which allows you to compare prices form many rent-a-car companies and book well in advance. 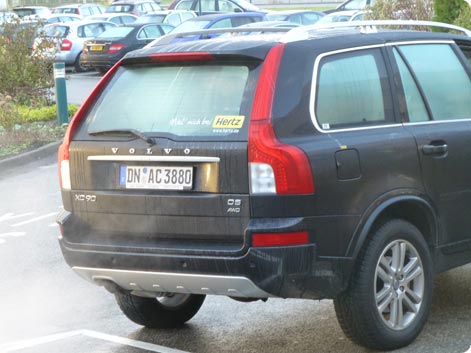 Car hire Bremen – rent a VW Golf for less than £150 per week
Usually, you will be able to rent a VW Golf (or a similar car from the economy class, for instance Opel Astra, Ford Focus, Renault Megane, or Peugeot 308) for less than £150 for a week. Do confirm however, under ‘Rental Conditions’ on each Cartrawler offer what is the applicable mileage policy, as some of Bremen Airport rental deals only allow a limited mileage without additional charges.

In the class of larger, luxury cars to rent at Bremen Airport you will often find BMW 3 Series, Mercedes C-Class and Audi A4. In 2013, the BMW 3 Series was the most popular prestige car for hire in Germany, especially in the rental fleet of Sixt Autovermietung rent–a-car company.

Many new BMW 3 Series cars are equipped with navigation package and other comfort features that may not be apparent while booking. Also, when hiring a new BMW 3 Series at Bremen Airport, you will almost always receive a diesel model.

A 7–days rental of a luxury vehicle in Bremen represents. Usually, an expense of approx.  £220-260, which I case of the latest models of BMW 3 Series is a money well spent.

See below driving in queues in Bremen area (E22 Groningen and Bremen) in a BMW 316d. 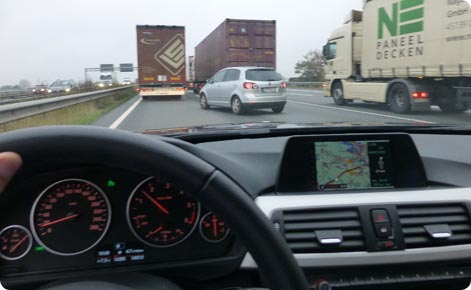 The city of Bremen is located within the smallest German state, the Free Hanseatic City of Bremen, which comprises the cities of Bremen and Bremerhaven.

In the past a member of the Hanseatic League (a confederation of merchant and trade cities and towns in the Baltic area), today’s Bremen is an important centre of commerce and industry, hosting headquarters and production plants of many large companies and corporations from the FMCG segment, amongst them InBev (Beck’s beer), Kellogg’s and Kraft Foods. Also, major parts of Airbus aircraft, as well as Mercedes cars are produced in Bremen. The city’s port on the River Weser continues among the most important harbours in Europe.

Distances from Bremen
Approximate road distances and travel time from Bremen are:

Major low-cost carrier Ryanair is present at Bremen Airport with a wide choice of cheap routes.  From the UK, Ryanair’s flights to Bremen are available from Edinburgh, London-Stansted and Manchester.