Find Wroclaw on a general map of Poland.

The airport in Wroclaw is considered to be one of the most comfortable airports in Poland, from the passenger point of view. It have been given a radical make-over, including a construction of a new terminal before Euro 2012 and is being constantly improved to meet the increased flow of passengers expected in 2016, when Wroclaw, together with the Spanish San Sebastian, will be the European Capital of Culture. 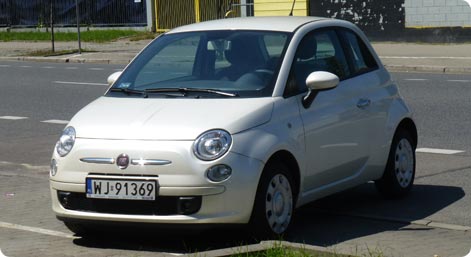 The cheapest hire cars in Poland are often a Fiat 500 or a Fiat Panda – both produced in southern Poland.© Photo: Find-cheap-car-hire.co.uk

Visit Wroclaw and be dazzled by the array of cultural attractions the city holds. A hire car, picked-up upon your arrival at Wroclaw Airport will allow you to get to and around the city and to travel to more remote locations of southwestern Poland, or even abroad, in Germany and Czech Republic.

Rent a car in Wroclaw Airport - compare prices with Cartrawler
At Wroclaw Airport you will be able to rent a car from a variety of car rental companies, including both international brands and local, Polish suppliers, amongst them: Avis Rent-A-Car, Europcar, Hertz, Sixt, Budget Car Rental, National Car Rental, Awos24, Panek and Express Rent-A-Car.

Car hire at Wroclaw Airport is quite easy - all the desks of the on-site car rental companies are conveniently located in the arrival hall. With Cartrawler renting a car in Wroclaw Copernicus Airport can be also made cheap. The search and booking engine displays current offers from major providers of car hire in a chosen destination, allowing you to compare prices and rental conditions. After having chosen an offer that best suits your needs, Cartrawler will guide you through a simple and safe online booking process.

The cheapest hire cars in Wroclaw can usually be rented on Cartrawler with prices starting from approx. £130-140 for a 7 days rental of a VW Polo, or similar.

Cheap flights to Wroclaw
Wroclaw Airport is well connected to Frankfurt, Dusseldorf and Munich in Germany by Lufthansa and Polish Airlines LOT.

The growing popularity of the airport, however, is greatly owned to the strong presence of the major low-cost carriers in Europe: Ryanair and Wizzair, offering routes to the UK, Ireland, Italy, France, Sweden and Norway.

In mid 2013, cheap flights from the UK to Wroclaw Airport were available with departures from Bristol, East Midlands, Liverpool, London-Stansted, and Prestwick (Ryanair) as well as from Doncaster/Sheffield and London-Luton (Wizzair).

On domestic routes, there are flights to Wroclaw from Warsaw-Chopin, operated by LOT/EuroLOT.

Wroclaw Airport - name and location
The airport is located in the south-western periphery of Wroclaw, known as Starachowice.

Although the official name of the airport is Wroclaw-Copernicus, locally Wroclaw airport is known mostly as Wroclaw-Starachowice.

Respecting Polish diacritics, the full name of the airport is Lotnisko Wrocław-Strachowice im. Mikołaja Kopernika. Because of the entwined Polish and Germany hisotry of the Silesia region, Wroclaw is sometimes referred to by its German name, Breslau.

Most car hire suppliers in Poland allow cross border travel to other European countires, however, the conditions may vary. If you are thinking of travelling abroad in a Wroclaw hire car, make sure to check what is the applicable cross-border travel policy.

The information about cross border travel, as well as other relevant information can be found under the ‘Rental conditions’ on each Cartrawler offer.

Since Poland is a part of the Schengen zone, border crossing to Germany and Czech Republic is easy and does not imply formalities or paperwork.

If driving in the winter, be aware that roads in the mountainous southern Poland, especially on the way to the Czech border may be heavily obstructed with snow.

See below approximate road distances from Wroclaw to some of the places of tourist interest in Poland and abroad: