Strangely enough, car rental companies in Germany, amongst them Avis Mietwagen (Avis Rent A Car Berlin) and Buchbinder often offer a mix of very small cars, such as VW Up and Fiat 500 in the same class as the larger super mini/economy cars Opel Corsa, VW Polo, Seat Ibiza and Ford Fiesta. 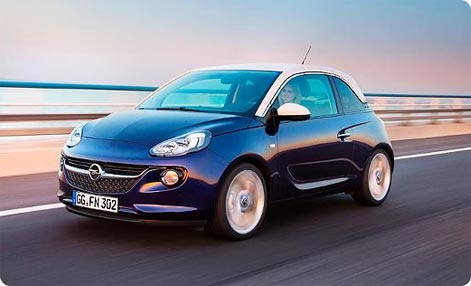 In 2014, Opel Adam is often the smallest and the cheapest hire car available from Sixt Car Rental Berlin.

When booking the cheapest hire car in Berlin, you are most likely to be offered a VW Up, a Fiat 500, an Opel Adam, although it may also happen that you will be handed in the keys to a VW Polo or an Opel Corsa instead. The cheapest hire cars in Germany are marketed under names such as Sparmobil or Kleinwagen belong to the German car rental market segment A.

Scheduled to be closed in 2015 and replaced by Berlin Brandenburg Airport (currently under construction in the area adjacent to the second Berlin airport in Schönefeld), Tegel Airport remains the main gateway of air traffic to Berlin.

Cheapest Berlin car hire deals – rent a large car at almost no extra cost
Families or larger groups of travellers visiting Berlin may be interested in hiring a large and comfortable car, which at Tegel Airport may often be only slightly more expensive than vehicles from smaller classes.

As an example, a VW Passat (or similar) can sometimes be found with prices starting from £135 for a week of Berlin-Tegel Airport car hire. The editors of Find-cheap-car-hire.co.uk, have seen offers of a super-cheap, VW Passat 4-door car, with unlimited mileage and allowed crossborder travels to virtually all European countries from Estonia to Portugal at this very attractive price. Such low-rates on a fullsize car hire are rarely seen and quite more competitive than, for example, in the United States. 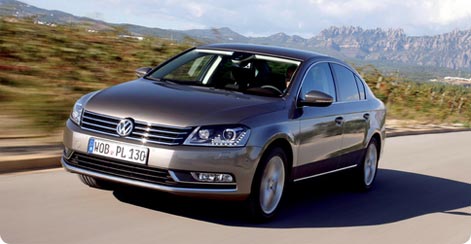 The best deals of Berlin-Tegel Airport car hire are often found within Passat car rental class. These large hire vehicles are a good value for money in Germany.

Usually, the cheapest cars to hire from Berlin-Tegel Airport can be found on Cartrawler with prices starting from around £100 for a 7-days rental of a small city car, for example a Peugeot 107 or similar. However, the small difference in price is often an argument in favour of choosing larger and more comfortable vehicles from the economy or compact class. Offers of a one week rental of a VW Golf to rent at Berlin-Tegel Airport start on Cartrawler from approx. £110.

The most popular routes at Berlin-Tegel airport are domestic connections to Frankfurt, Munich, Dusseldorf, Cologne-Bonn and Stuttgart. On international routes, flights to Zurich, London-Heathrow, Vienna and Paris-Charles the Gaulle brought the largest numbers of passengers to Berlin Tegel Airport.

In the UK it is possible to fly to Berlin-Tegel with British Airways, with departures from London-Heathrow, and with the growingly popular low-cost carrier Germanwings, on routes from Birmingham and London-Heathrow.

Lufthansa flights from Tegel to London terminate in January 2014.

BMW car hire from Berlin-Tegel Airport
The new BMW 3 Series can be found in the car hire fleet of virtually every car hire provider in Germany.

At Berlin-Tegel Airport competitive offers of mid-range luxury cars to rent, amongst them BMW 3 Series (typically a BMW 316d) , a Mercedes C-Class or an Audi A4 can sometimes be found from £200-210 for a week, including unlimited mileage and allowed cross border travels to most European countries.

The airport is connected to the A111 motorway which links to A100 and later on to Bismarcstrasse leading directly in to Berlin city centre.

If you are planning to drive in Germany in a hire car from Berlin-Tegel Airport, consider the following approximate road distances: