Alexandroupolis Airport – AXD is the easternmost airport of continental Greece. It is located about 4 miles east of Alexandroupolis (or Alexandroupoli), the capital of the Evros regional unit and by the border with Turkey. The proximity to main national road E90 makes it a convenient base for exploring the region.

Even in the peak season in Greece, well priced rent-a-car deals can often be found by booking online. 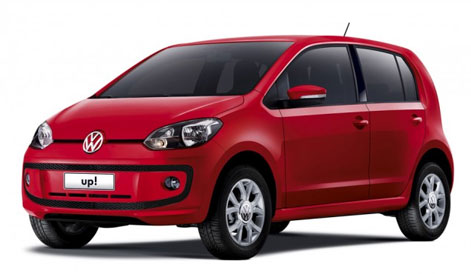 VW Up, one of the cheapest cars in Alexandroupolis Airport car rental fleet.

The airport is also known as ‘Democritus’ or ‘Dimocritos’ airport.

Travel to Alexandroupolis
The fairly modern city of Alexandroupolis developed mostly in the 20th century from a small fishing village. As such, it does not boast any significant historic heritage, being the beaches, the waterfront and the characteristic lighthouse the major landmarks of Alexandroupolis.

The strategic position on route between Greece and Turkey, however, boosted the growth of transportation infrastructures, which include railway and the airport, both offering international connections.

Despite the international status currently (mid-2017) the airport operates primarily domestic flights to Athens and Sitia (Crete). Olymipc Air and Sky Express are the sole carriers at Alexandroupolis Airport. The airport serves approximately 160 000 passengers per year.

Rent a car companies at Alexandroupolis Airport
The airport is well served of car rental providers. You will find here most major rent-a-car brands, such as Alamo, Avis, Budget, Thrifty, Sixt, Hertz and Europcar, as well as the Greek renters, Auto Union and Abbycar.

The car rental fleet in Alexandroupolis is diverse and ranges from small (and cheap) city cars, to large people carriers. Pease remember that booking in advance is highly recommended for either minivans for up to 7 people or 9-seaters/minibuses, especially in the summer season when they are in high demand.

SUVs are quite popular in car rental companies in Alexandroupolis. The available options include the small Suzuki Jimny as well as the much larger Suzuki Grand Vitara and Jeep Renegade.

Driving to Turkey in a Greece rental car
If you are planning to drive to Turkey in a car rented in Greece, please note that the majority of Alexandroupolis Airport rent a car deals disallows any cross-border travels.