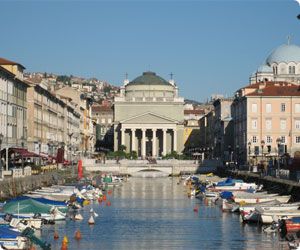 Trieste Airport is situated in northeastern Italy, close to the border with Slovenia and approx. 30 miles northwest of Trieste city centre. Because of its geographical location, Trieste Airport is largely used by the Slovenian as well as the Croatian population.

Some of the major airlines operating at Trieste Airport are: Alitalia, Air France, Belle Air, Volotea and Lufthansa, not to forget the low-cost carrier Ryanair. From the UK low-cost flights to Trieste are available with departures from Stansted and Birmingham.

Cheap car hire Trieste Airport - Cartrawler Italy price comparison
Trieste Airport car hire is a popular option amongst tourist looking to get to know more thoroughly the region: the Trieste province but also Slovakia and slightly more distant Croatia. Outside of the strict holiday season, for instance in September, when the weather on the Adriatic coast is still very pleasant, the cheapest Trieste Airport car hire offers can be found with prices starting from around £140 for a week rental of a small city car, such as Peugeot 107, or similar. Use Cartrwler Italy search engine below to compare prices of car hire from major international and local car hire companies in Trieste Airport: Sixt, Alamo, Budget, Avis Rent A Car, Hertz Italy, Europcar, Locauto and Maggiore Autonoleggio.