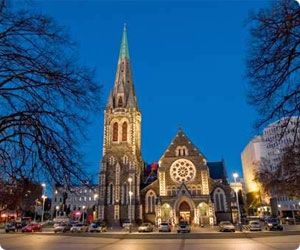 Christchurch Airport (CHC) is the second largest airport of New Zealand (after Auckland Airport). It is located on the South Island, on the north-western limits of the city of Christchurch. The airport offers domestic routes as well as international routes, mostly to Australia (Brisbane, Melbourne, Sidney), Thailand, Singapore and China. No direct flights from Europe are available to Christchurch.

Struck by a series of devastating earthquakes between 2010 and 2012, the city managed to rebuilt itself and to retain the status of New Zealand’s second largest metropolitan area. Today, once again it is known by its beautiful architecture and an abundance of landscaped gardens, thanks to which is often referred to as The Garden City.

Christchurch Airport car rental – explore New Zealand in a hire car
Car rental is a great solution for discovering the wonders of New Zealand. Use Cartrawler search engine below to compare rates from all major car hire companies operating at Christchurch Airport, such as Avis, Budget, Europcar, Hertz and Thrifty, as well as from the local providers, Ace Rental Car, Snap Rentals, Scotties and Ezi Car Rental.