What to see in Poznan, Poland

The city of Poznan ('Poznań' in the Polish spelling, or 'Posen' in German)  is a capital of the Greater Poland region and a major hub for business in Poland.

Known for its economic activity and international trade fairs, to many visitors who arrive here in professional capacity Poznan often reveals itself as an unexpectedly interesting tourist destination. The city is rich in attractions, both historic and contemporary. 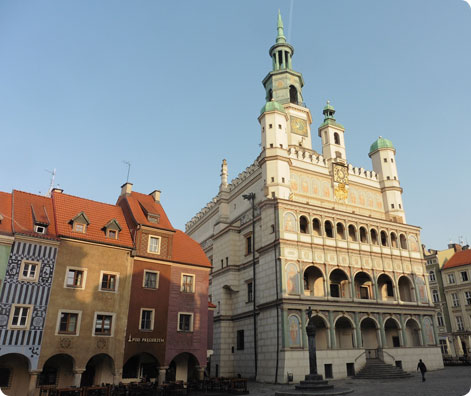 Below is a suggestion of just a few places to visit in Poznan and surroundings.

Old Market Square (Stary Rynek)
Poznań boasts one of the most beautiful medieval squares in Poland. Measuring 141 meters in length and width, it is the third largest square in Poland and the tourist hotspot of the city. Meticulously reconstructed after the World War II bombings, the Market Square is rich in monuments and landmarks, amongst them the beautiful building of the Town Hall (Ratusz).

Surrounded by the picturesque, colourful façades of the gothic and renaissance town houses, the central part of the square is a favourite meeting place for locals and visitors alike, who can chose from a variety of fine restaurants and cafes.

The clock tower of Poznan Town Hall dominates over the Market Square and contains one of the most popular attractions of Poznań: the mechanical goats which emerge from the door over the clock and butt heads as the clock strikes noon. This ‘ceremony ‘ takes place every day and is accompanied by a bugle signal played by a trumpeter.

The Town Hall is home to the splendid Historical Museum of Poznan, which provides a very interesting insight into the history of the city.

Many cultural events take place on the Market Square over the year, amongst them the concerts of the Malta Festival  or the summer solstice fair (Jarmark Swietojanski).

Ostrów Tumski –The Cathedral Island
The original settlement of Poznan was located on the Ostów Tumski Island on River Warta, north-east of the city centre. A castle erected here in the 9th century and a cathedral, dating back to the second half of the 10th century were the seat of the firs Polish dynasty of Piasts. The island is also believed to be a place where the first Polish king Mieszko I submitted Poland to Christianism and was baptized himself. The St. Peter’s and St. Paul’s Cathedral is the burial place of the first Polish monarchs and makes for a very interesting visit. Amongst other landmarks of the island are the gothic Church of the Virgin Mary and Porta Posnania Interactive Heritage Centre, considered one of the best museums in Poznan

The Royal Castle (Zamek Królewski)
North-west of the Old Market Square stands a Royal Castle. Its original construction, dating back to the 13th century gained several additions in different architectonic styles across the centuries. In order to restore the castle – a place of a somewhat forgotten historic importance – to its former glory, the local authorities are conducting a thorough renovation process.

The Emperor’s Castle (Zamek Cesarski)
The main landmark of the Emperor’s district of Poznań, west of the Old Market Square is a neo-Romanesque castle build in the early 20th century and inaugurated by the Prussian ruler Emperor Wilhelm II. Nowadays the castle is home to several cultural institutions and a venue for concerts and exhibitions.

Lake Malta district
While the majority of Poznan attractions is located on the left bank of River Warta, on its right side the Malta district is definitely a place to visit. The man-made lake, stretching over 2.2 km (nearly 1.4 miles) is surrounded by woodland and parks is the city’s main recreational area. A ski slope, an ice rink, a boat race course, a zoo, a water park and a spa are just some of many attractions available here both during the winter and the summer. Find out more information about the Malta spa (Termy Maltanskie) and waterpark.

Lake Malta is the favourite picnic place for the local and a venue for major open-air events, amongst them the Malta Festival. Originally an event dedicated to theatre and performing arts, the Malta Festival has evolved over the 25 years of its existence towards the pop culture attracting Polish and international artists. Sinead O’Connor, Elvis Costello and Buena Vista Social Club were some of the artists who already performed at Malta Festivals in its previous editions. Find out more about Malta Festival.

Brewery sightseeing tour
Beer is a drink well-loved in Poland and the Greater Poland region has a long tradition in beer brewing.  In Poznań, one of the most popular Polish beer brands, Lech, made available for visitors a part of its brewery. The tour, ending with beer tasting is available only for adults.

Poznan shopping
There are several large shopping centres in Poznań. If you are looking for shopping opportunities, apart from the traditional souvenir purchase, the Old Brewery Mall (Stary Browar) is one of the suggestions. It is by far the most sophisticated shopping centre in Poznań. Partially housed in the 19th century brewery, Stary Browar incorporates many elements of the original architecture and the brewery mechanisms into the mall’s structure, being apart from a retail area, also a public venue for art in its different forms.

In 2005 Stary Browar was voted the best shopping centre in the world.

Poznan daytrip ideas
If your time allows it, a number of tourist attractions outside Poznań is well worth a short trip.

Gniezno, 38 miles north-east of Poznań is considered the cradle of the Polish state and the country’s first capital. The town boast a unique historic heritage; apart from the superbly preserved medieval townhouses, churches and an impressive  14th century Gothic cathedral, the museum of the origins of the Polish state is a recommended visit.

In the Kórnik village, 16 miles south-east of Poznan, a 14th century castle with its beautiful interiors and an extensive art collection is not the only attraction. Take time to stroll in the arboretum, adjacent to the palace. This is the oldest arboretum – a tree collection that is – in Poland, containing over three thousands species of trees and shrubs from all over the world.

A visit to Kórnik can easily be combined with a visit to another site of significant historical importance nearby, the Rogalin palace and museum. Built in the second half of the 18th century as a residence for a Polish noble family of Raczynski, the palace is a real architectural gem. Its generous collection of art is a part of the National Museum branch in Poznan.