What to see in Gdansk

Gdansk (Danzig in German and Gdańsk in Polish), the major city on the Polish Baltic coast is at the forefront of city destinations in Poland, just after Warsaw and Krakow. Popular amongst both Polish and foreign tourists, Gdansk is served by an international airport providing a wide choice of domestic and international flights.

Gdansk is the most important component of the so called Tri-City area which comprises also the ‘spa-city’ of Sopot and the industrial Gdynia - see map.

Visited by over 5 million tourists per year, Gdansk is a cultural hotspot with a remarkable historic heritage and a vibrant art scene. In Gdansk you will be able to revisit some of the most important chapters of modern European history, relax at the beach and indulge yourself in with an excellent choice of hotels and restaurants. Find below a few suggestions on what to see in Gdansk, beyond the obvious tour of the Old Town.

Hansa, WWII and Solidarity – history always alive in Gdansk
The city of Gdansk breaths history and valuable monuments from different eras are scattered all across the city.

In the 17th century Gdansk lived its Golden Age as an important part of the Hanseatic League. The thriving Baltic maritime trade brought not only material wealth to the city but also a cultural one, with many works of art commissioned from Flemish painters, Italian architects and artisan from other corners of Europe.

Get familiar with the history of Gdansk as a trading power by visiting The Artus Court, an opulent mansion built in the 16th century and further reconstructed, after a fire, in the 19th century. For many years Artus Court served as an exchange and a meeting place for traders and merchants. The impressive façade of the building is matched by the lavish interiors, filed with paintings, tapestry, ornamented furniture, a collection of armours and an unique 11 meter high furnace laid with tiles depicting great public figures of the past.

Artus Court is located right next to the Long Market (Dlugi Targ), which once used to be the city’s most representative markets and nowadays is massively visited by tourists, because of its elegant architecture, a lot of which has been claimed by restaurants, cafés and souvenir shops.
One of Gdansk’s most iconic monuments, the Neptune’s Fountain is also located here.

Once in Gdansk Old Town, take a stroll along the Motlawa River embankment , to see the Crane (Zuraw). This, once biggest working crane in the world was used to help load and unload the merchants’ boats arriving to the city. In use until mid-19th century, the Crane was nearly entirely destroyed during the battles of WWII. Reconstructed, now it is a part of the Polish Maritime Museum.

Westerplatte – WWI history in Gdansk
Gdansk was the stage of the very first battle of WWII. The Westerplatte Peninsula between River Dead Vistula and the Baltic Sea was the Polish military outpost during the inter-war period. On 1 September, the Polish garrison was attacked by the incomparably superior German forces from the Schleswig-Holstein battleship.

Manned with only 182 soldiers and scarcely equipped, Westerplatte post withheld its position for 7 days, delaying significantly further German attack on the Baltic coast. The site of the heroic struggle of the Polish army has been converted into a museum.

The cradle of Solidarity movement
The rather unsightly shipyard area of Gdansk was a birthplace of one of the most important movements in the contemporary history of Europe. In the gloomy scenery of docks, warehouses and cranes, the first independent labour union was created in Gdansk, leading to revolutionary changes which forever altered the status quo of Soviet Union controlled Central and Eastern Europe.

Visit the places where the opposition’s leader, Lech Walesa worked and gained popularity and for a comprehensive tour of the history of the Solidarity’s movement, stop at the European Solidarity Centre, or the Solidarity Museum as it is commonly called.

Housed in a rust-covered, architectonically unattractive building, the Solidarity Museum is considered one of the best expositions in Poland. Through a series of installations, many of the interactive, it explains in detail the events which led to the end of the Soviet Union domination in Poland.  Find information about Solidarity Museum opening hours, tickets and programme.

The Shakespeare Theatre Gdansk
Amongst many of Gdansk’s original landmarks one is an absolute must for any theatre lover. Gdansk Shakespeare Theatre is a unique project developed under the patronage of Britain’s Prince Charles himself, dedicated to the revival of the Elizabethan theatre tradition.

Although the link between a city in Poland and the most famous theatre play writer is not very obvious, a quick insight into Gdansk history allows to understand  it: in the past Gdansk was on the route of not only merchants but also travelling English actors who would visit the city regularly to perform.

The theatre was built on a 17th century site of an actual theatre which shared its space with a fencing school and is a copy of the London Fortune Theatre of 1600.

The original, black brick structure is, however, the only theatre in the world to have an opening roof to recreate the reality of the open-air Shakespearean theatre tradition.

The theatre stages performances in different languages serving as well as a venue for exhibitions and workshops. Find more information about Gdansk Shakespeare Theatre.

Gdansk with kids – the Hewelianum Centre
One of Gdansk’s most famous sons was the astronomer Johannes Hevelius, or Jan Heweliusz in Polish, known for his input into the study and describing of the constellations. Is work and contribute to astronomy is honoured is remembered in the Hewelianum science centre, which provides hours of entertainment for both adults and children.

The centre is located in an old fortress and features a historical section and a scientific one.  In the first one, called ‘The Time Machine’, the visitors are transported into the past through expositions of period costumes and weaponry.

The second part, names ‘With Energy’, tackles the laws of physics and the mysteries of astronomy in a very approachable way, through a series of interactive exhibits, workshops and presentations. Find more information about Centrum Hewelianum opening times and tickets.

Gdansk curiosities
Only few will know that Daniel Fahrenheit, a physicist immortalized by the invention of mercury thermometer and the temperature measurement scale was born in Gdansk. The scientist is honoured by a monument representing an old type thermometer, to be seen at Long Market, on the corner of the Mieszczanska Street.

One of the quirkiest Polish landmarks, the famous Crooked House (Krzywy Domek) is located in Sopot, approximately 8 miles from Gdansk city centre. The surrealistically shaped building is a part of a shopping mall. 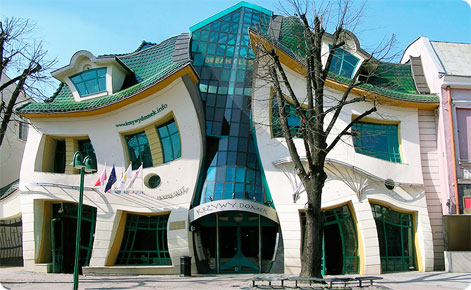 The ‘Baltic Gold’, amber, is by far the most sold souvenir in Gdansk. Do take your time and shop around before purchasing your amber jewellery; apart from the very basic and unoriginal collars or earrings, sold virtually everywhere, you can often find real pieces of wearable art in Gdansk.

The Amberif fair held in Gdansk is the largest event in the world dedicated to amber and a great place to purchase quality amber products. If your budget allows some extravagance, look for items with authenticity certificate.

The fair is usually held outside of the tourist season (the next to take place between 22 and 25 of March 2017). In the summer season you will have plenty of opportunities to shop for amber from the local artisans at the St. Dominic’s fair. In 2016 the fair is between 30 July and 21 of August.