Weather in Rome – the best time to visit the Italian capital

The capital of Italy remains amongst the most visited cities in Europe, together with London and Paris. The choice of the time to visit Rome may, however matter a little bit more than in case of the capitals of the UK and France.

Rome is situated further south than the other two cities has a Mediterranean climate with mild, humid winters and hot to very hot dry summers.  While the idea of having a traditional gelato with a view to the Spanish Steps might is very appealing, the scorching heat often experienced here during the summer may make the gelato melt faster than you are capable of eating it.

Despite the heat, July and August, the traditional school holiday months are the busiest time for tourism in Rome. Apart from millions of foreign tourists also Italians themselves flock to the capital. Crowds near any major tourist landmark are guaranteed and chances to take photos of the Trevi Fountain without dozens of strangers in the picture frame virtually none.

The highlights of Rome sightseeing:

Find out what weather to expect in Rome during different time of the year.

Summer in Rome – hot, hot, hot
The average summer temperatures during the day are of around 24 degrees during July and August, but may easily exceed 30 degrees Celsius, which combine with ever-present crowds and queues is a recipe for a disaster if you’re on a short city break in Rome.

If your time allows it, try to plan visiting the most iconic open air monuments early in the morning and retreat to air-conditioned indoors round noon and in the early afternoon. During the summer months the sun shines between 9 and 10 hours in Rome (with the total of 14 to 15 hours of light per day) and shadow is at the price of gold during that time. Bring hats, sunscreen and plenty of water.

Evening on the other hand are fairly pleasant in the Eternal City and perfect for al fresco suppers.

Rain during June, July and August is a very rare occurrence in Rome. The light drizzle doesn’t last long and should not disrupt your sightseeing.

Autumn – prime time for visiting Rome
Starting from September, the temperatures gradually decrease in Italy, although for most of the time still remain at comfortable 15-20 degrees Celsius, which make early Autumn the best time to visit Rome. Considerable amount of visitors are still to be expected, but the queuing times to most attractions are much more manageable and the prices of hotels have already decreased a little.

The chance of precipitation is higher. There are, on average, 6 rainy days in September and 8 in October but the day is still considerably long and sunshine hours range from nearly 8 in September to 6 in October.

November is a transition month between the warm season and the Italian winter. The average daytime temperature is of 13 degrees and it rains for about one third of the time.

Although Rome never lacks visual appeal, in Autumn you can additionally count on a beautiful spectacle of trees changing colours which usually takes place in October.

Rome holiday in winter
The rain is the most characteristic element of December which is the wettest month in Rome. The daily temperatures drop below 10 degrees Celsius but rarely ever reaching the freezing point. January is the coldest month during the Rome winter with average daytime temperatures of 7 degrees.

In terms of tourism, winter months are the time when the least tourists visit Rome. If you are not afraid of gloomy skies and chilly weather, Rome has still plenty to offer, and at off-season prices.

See a traveller’s experience of a December trip to Rome:

Snowfall is very rare in Rome. Given the fairly high average temperatures, the snow never accumulates.

Spring in Rome  – warm and sunny
Much like Autumn, Spring is for many an ideal time to visit Rome. Although on the beginning of the season the daytime temperatures are not impressive, about 10 degrees in March and 12 in April, there is a good amount of sunshine hours (7) and fairly little chance of rain. May, although rainy, brings average temperatures of 20 degrees Celsius, being the last call for visiting Rome for those with low tolerance for heat.

In the spring, Rome covers in beautiful and varied colours of blooming trees and flowers and a number of outdoor events and festivals invite the inhabitants and the visitors to make the most of the improving weather. 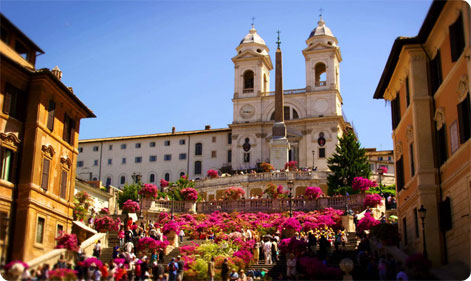 Azalea bloom on the Spanish Steps.

When on a spring break in Rome, do not miss the celebrations of the city’s anniversary on 21 April. According to the legend the city was founded on that day in 753 BC by Romulus, one of the twin brothers raised by a she wolf.

The recreation of historic events, costume parades and fairs take place in different location of Rome, culminating in the firework display at the end of the day.