Side (pronounced as ‘see-deh’) is a seaside town on the southern coast of Turkey, east of Antalya. See map.

Along with other holiday resorts of Turkey, Side has been attracting growing numbers of tourists from the UK.

Apart from the spacious clean beaches and warm waters of the Mediterranean, holiday-makers in Side appreciate the delightful mix of remarkable historic heritage and modern amenities. Still less popular than the cosmopolitan (and crowded) Antalya, Side is a perfect location for family holiday. 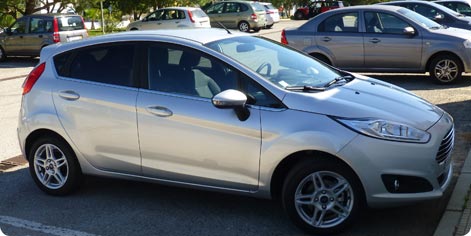 Car rental Turkey – in Side or in Antalya Airport, Ford Fiesta is often amongst the cheapest hire cars in economy class. © Photo: Find-cheap-car-hire.co.uk.

The D-400 state road, however, allows to travel comfortably to Antalya, 75 km (47 miles) west of Side, as well as to other interesting locations of the Turkish coast, amongst them: Alanya, Gazipasa and Mersin, east of Sid and towards the border with Iran. West of Side, the D-400 leads through Belek, Antlaya, Kemer, Fethyie, towards Marmaris. If you are planning to explore the Turkish Coast in a rental car, find the best rates on Turkey car hire online

Side beaches
With a beach season lasting for nearly three quarters of the year – with temperatures of both air and water above 20 degrees Celsius from April to November, Side is a safe bet for sun-seeking visitors from northern Europe.

Golden sand beaches stretch both east and west of the peninsula on which Old Side was build. Although Side beaches (many of them awarded Blue Flag distinction), are generally very safe, with the sea bottom gently sloping into the Mediterranean, Side West Beach is more sheltered and proper for families with children, than the windy East Beach.

See the aerial view of Side, Turkey:

Watersports Side
If lounging in the sun and bathing in the warm sea is not enough, a range of water sports are available for the active holidaymakers in Side, amongst them parasailing, jet-skis and banana boats. Diving is also very popular on the coast of Side, which offers diving sites adequate for beginners as well as for experienced certified divers. The latter can try more challenging diving sites as for example the wreck of a Turkish Republic Sea Guard ship, lodged on the sea bottom at 25 meters of depth.

Side monuments – the lesson of history
With its origins dating back to the 7th century BC, the city of Side s considered to be one of world’s most notable archaeological site.

Founded by the Greeks, Side grew into prosperity under the ruling of Alexander the Great, becoming an important cultural centre and later, a key port for the slave-trade in the Mediterranean. The city continued to grow under the influence of Roman Empire and today the Side’s historic monuments of both Greek and Roman are countless. Amongst the most iconic historical sights in Side are:

See the highlights of Side sightseeing from the tourist point of view:

Manavgat Waterfall – a day trip idea
The waterfall on Manavgat River is a popular sightseeing spot and a frequent destination of daytrips from Side.

The waterfall is located approx. 6 miles north-east of Side and can be easily reached by car or through one of the many local tour operators. Although the waterfall itself is not very large, the surrounding area is very pleasant and perfect for a pic-nic in the lush greenery. Alternatively, several restaurants are available on the terraces surrounding the waterfall.

The waterfall can be also reached by boat from Manavgat town.

More adventurous tourists in Manavgat may also try rafting trips in the Koprulu Canyon, set in a beautiful scenery of a national park.

Should you happen to visit Manavgat on a Monday, try out the weekly market where local produce, fruit, vegetable and cheese, as well as the craftworks are sold.

Side Air Show
The International Air Show held in Side is on of the most popular events in this corner of Antalya, attracting both locals and visitors. See below a footage from Side Air Show 2013:

Travel to Side through Antalya Aiport
Antalya Airport is the major gateway to Side for tourists arriving from abroad. The airport receives flights from major European cities, including a large choice of routes from the UK, available from Easujet, Jet2, Monarch, Pegasus Airlines, Thomas Cook and Thomson Airways, amongst other carriers.

Frequent domestic flights to Antalya Airport are available from Istanbul-Ataturk (with Atlasjet Airline).

It takes approximately 1.5 h to drive from Antalya Airport to Side.

Antalya Airport car hire – the cheapest rental cars in Turkey are often locally produced
It is often cheaper to rent a car from Antalya Airport than in the resort towns of Alanya, Side, Belek or others.

Weekly price below £100 is not unusual when booking slightly off season.

The lowest prices in Turkey car hire are usually available within the group of basic models, produced locally, such as, for example, Renault Symbol, Fiat Linea, Hyundai i10, Hyundai i20 or, sometimes the slightly older Fiat Albea. When booking a car from Enterprise, Avis, Hertz, Sixt or another global car rental brand, there is more chance of getting a “Western European” car, such as Ford Fiesta, Ford Ka, Citroen C1, VW Polo, or Renault Clio, depending on the rental class you chose. 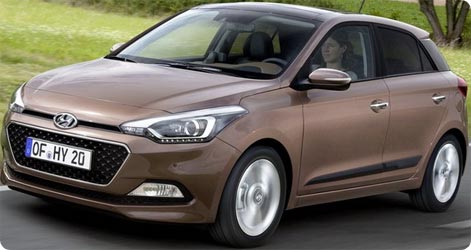 The well built new Hyundai i20 model 2015 produced in Turkey – available in many rental companies in Antalya, Belek, Side or Alanya from 2015.

Side Turkey - weather and climate information
Weather in Side, Turkey is very similar to weather in Antalya.

Summers in Side are very hot, with average temperatures above 30 degrees Celsius during the day. On few occasions in July and August, the temperature can reach even the uncomfortable 40 degrees at noon.

Sunshine hours Side, Turkey
One of the greatest assets of Side as a holiday destination is a very high number of sunshine hours. In fact, tourists will find more sunshine in Side, on the Turkish Riviera, than in the commonly acknowledged as “sunny” California in the USA or Algarve in Portugal.

Below the daily sunshine hours in Side, throughout the year:

Rainy weather in Side is experienced mostly between November and December. In the summer months of June, July and August there is practically no rain in Side.