Visit Porto, the city in transformation

For several year now, Porto, the largest city in northern Portugal, has occupied the highest positions in rankings for the best city destinations.

Well loved by the Portuguese and the foreign tourists alike, the city which is also known as Invicta – The Undefeated, or the Northern Capital, Porto was recently chosen the European Best Destination 17, repeating the achievement of 2012 and 2014. The city is also on the prestigious list of European Capitals of Culture.

What does make a city located at the edge of the Old Continent worthy to compete with the European tourist staples such as London, Milan or Rome? What explains the preference of hundreds of thousands of tourists who chose Porto over the cosmopolitan Lisbon or the renowned resorts of the sunny Algarve?

One of the most important elements to contribute to the recent success of Porto as a tourist destinations is probably the balance it has managed to achieve between the past and the present.

Located in the Douro river estuary, Porto is a city of singular natural settings and a spectacular historic heritage. It is also one of the greatest examples of an intelligent urban revival of the historic districts, with respect to the tradition and just the right amount of modern intervention.

The careful and coherent  restoration works carried in the historic district helped to reveal the city’s elegant architecture which for many decades before remained hidden behind the dilapidated façades of the centuries-old buildings. Any mod cons of a 21st century city have been introduced in an effortless, unpretentious way, not taking away from the city’s historic soul, but rather enrichening it.

The bet on developing the transportation infrastructure paid off. Porto Airport ranks amongst the best European airport within its size group and slots for flights to and from Porto are in high demand. Low cost airlines made themselves at home in Porto, making it easier than ever to reach the city from many European airports, as well as from the other mainland Portugal airports of Lisbon and Faro.

The unanimity with which the participants of the European Best Destination voted proved that the tourist development strategies Porto opted for resonated with a very broad audience. More than 135 thousand travellers participated in the voting and only 40 thousands votes were cast by the Portuguese themselves.

During 2016, the best so far year for tourism in Porto, the city received 1.5 million visitors. Based on the number of bookings already registered for 2017, it is expected that the growth tendency will persist.

See below the overview of the most popular Porto attractions.

Historic centre of Porto
For the great majority of tourists a visit to Porto starts in the city’s old quarters which, due to the high concentration of outstanding monuments has been declared the UNESCO World Heritage Site.

The historic centre spreads on a relatively small area and is best visited on foot. Amongst the most iconic Porto monuments are:

Torre dos Clérigos
Measuring 75 meters in height, the 18th century Clerigos tower is one of the most iconic landmarks of Porto.  The Baroque, lavishly ornamented tower was designed by the Italian architect Nicolau Nasoni and raised to complement the Clerigos Church, which by itself is also worth a visit. The tower, visible from most parts of the city is a great point of reference for tourists wandering along Porto’s winding streets.

Estação São Bento
Not far from the Clerigos Tower rises Portugal’s most beautiful train station. It stands out amongst the usually unexciting railway facilities by the extraordinary tile work covering its interior walls. Oblivious to the day-to-day trivialities and crowds of tourists and commuters, the blue, hand-painted tiles depict great scenes of the Portuguese past. 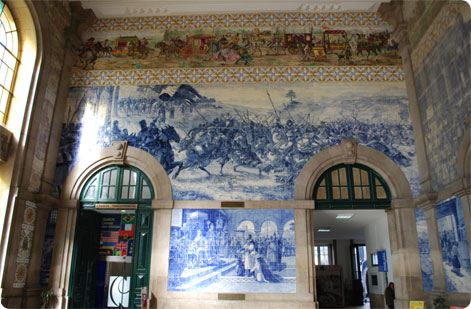 The Conquest of Ceuta by the Portuguese in 1415 inspired one of the tile panels of Sao Bento Train Station.

Palácio da Bolsa
The 19th century was a time of great prosperity for the city of Porto. The past glory of the city which built its wealth on the  thriving commerce is best symbolized by the opulent interiors of Palacio da Bolsa, the Stock Exchange Palace. Built between 1842 and 1880, Palacio da Bolsa was a place where wealthy merchants from all over Europe would negotiate and close their deals an where economic strategies impacting the whole of Europe were drawn. Despite its utilitarian purpose, the building grandiose architecture and lavish ornamenting would put to shame many of the royal residences of its era.

Although nowadays the palace headquarters Porto Chamber of Commerce, its large portion  is open to visitors. Do not miss out on the Arab Hall, the Nation’s Room and the Old Courtroom.

Ponte D. Luis I
The majestic D. Luis I bridge is probably to Porto what the Eiffel Tower is to Paris. The bridge linking Porto to Vila Nova de Gaia across River Douro was designed by one Eiffel apprentices and bears great influence of the French architect’s aesthetics. The two decks of the bridge, connected by a metal arch, are now inseparable element of Porto cityscape. 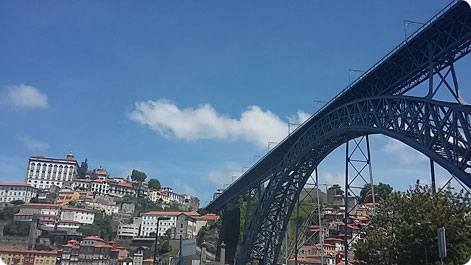 Ribeira
Porto riverside district, Ribeira, is the city’s busiest area. Lined with restaurants, bars and souvenir shops, Ribeira is also packed with tourists. Even if you are not a fan of the day-and-nigh hustle and bustle of tourist hot-spot, give Ribeira a chance and take a lazy stroll along the river bank to enjoy the great views of Douro, the port wine cellars across the river and the beautifully renovated, colourful façades of townhouses.

Lello bookstore
Considered the third most beautiful bookstore in the world by Lonely Planet, Livraria Lello has always attracted great public. I wasn’t, however, until the great success of the Harry Potter series, when this unique bookstore has entered the list of Porto’s must-sees. J.K. Rowling  who used to live in Porto admitted that some of the scenarios created for the Harry Potter saga were inspired on the puzzling architecture and the somehow mysterious ambience of the Lello bookstore. 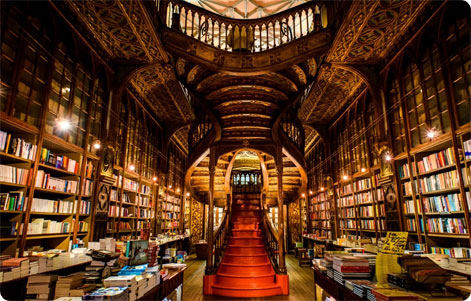 The staircase of Lello Bookstore is said to have been an inspiration for Harry Potter’s library in Hogwarts.

In order to be able to fully enjoy the magnificent art nouveau interiors of the bookstore, try to visit early, just after opening, before the tourist crowds arrive. The entrance to the bookstore is ticketed, the value of the ticket however (4 euros) is redeemed when purchasing books.

Porto wine cellars
The city which gave name to one of world’s most famous wines is a paradise or wine lovers. Even those who do not appreciate the sweet and heavy port wines, may still find interesting the tours of the local cellars and wineries.

The majority of port wine cellars, caves in Portuguese, are located in Vila Nova de Gaia, on the southern bank of River Douro. Ferreirinha, Taylor’s, Sandeman, Croft, Offley, Graham’s are some of the most popular winemakers who open their cellars to visitors offering a variety of activities, from the simple wine tasting, to more sophisticated experiences such as blind tasting or wine and food pairing. Guided tours to the cellars are a great way to learn not only about the wine making process but also about the history of Porto.

Porto beaches – Foz
The city of Porto, much like the northern region of Portugal in general, is not known as a beach destination. It can hardly compete with the warmer climate and scenic coast of the Lisbon area and, especially, with the sunny Algarve.

This doesn’t mean, however, that you will not find opportunities to relax at the beach in Porto. The western part of the city, known as Foz, meaning ‘the river mouth’ in Portuguese, makes the most of its natural settings, combining the existence of several good-seized beaches with great infrastructure for running, biking or strolls. One of the most emblematic spots on the Porto coast is the Foz Promenade with the characteristic pergola inspired on the Promenade des Anglais in Nice, on the French Riviera. 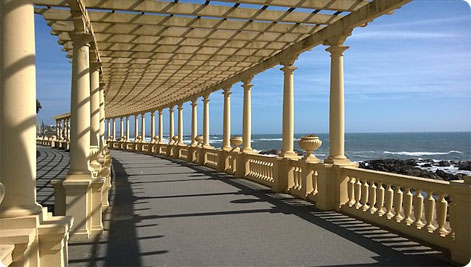 Pergola da Foz is a great place to admire sunsets over the Atlantic Ocean.

Estádio do Dragão – FC Porto Stadium
While the capital of Portugal divides its affections between two Lisbon-based football clubs, Sporting and Benfica, Porto worships only one. The magnificent Estádio do Dragão, meaning ‘Stadium of the Dragon’ is the ultimate proof of love the people of Porto have for the FC Porto team. Inaugurated in 2003, the stadium with capacity for 50 thousand is a majestic structure, featuring many state-of-the-art solutions for a venue of this kind. Equally interesting is the FC Porto museum, located on site. Rather than a mere collection of trophies and pictures, it is innovative and entertaining presentation of the club’s history through interactive multi-media installations, holograms, etc..

Eat well in Porto
The broad range of food options available in Porto reflects the in a way the spirit of the city.

Although most international cuisines – Italian, Chinese, Japanese, as well as the American-inspired fast food and the increasingly more popular nouvel cousine – are widely available in most tourist areas, Porto remains faithful to traditional regional gastronomy.

The two most typical dishes, both hearty and with little finesse are: tripas a moda do Porto, tripe cooked with beans, vegetables and pig trotters and francesinha, a massive mess of a sandwich, filled with different types of meat and sausages, covered with cheese and served drowning in thick sauce, topped with an egg. 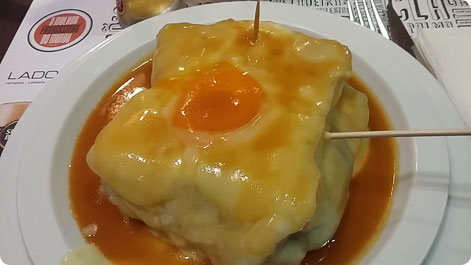 Francesinha, although technically only a sandwich is not for the faint of heart. Here in a delicious vegetarian version served in Lado B Café. © Photo: Find-cheap-car-hire.co.uk.

Both dishes are rather heavy on the stomach and often prove to be a bit overwhelming for those trying them for the first time. Don’t despair if you prefer a lighter diet, though. Porto restaurants and eateries offer many alternatives including more and more popular vegetarian and vegan options. Even the famous francesinha is now available in a meatless version, filled with delicious tofu, soy and mushroom substitutes.