This is Warsaw – facts, landmarks and areas

The rivalry between the Polish capital, Warsaw, and the cultural jewel, the city of Krakow, located in the Polish south, is well-known to Poles and to the growing number of foreign tourist often confronted with the difficult choice of city-break destination in Poland.

Although, recently Gdansk on the Baltic coast has also joined the competition, Warsaw is winning by numbers of foreign visitors. A constantly developing offer of direct routes to the capital via main Warsaw Chopin Airport, as well as the low-cost Modlin Airport surely contribute to the city’s popularity, especially where cheap flights to Warsaw are concerned.

A thriving business and leisure destination, Warsaw is also a rapidly developing education hub, attracting students from all over the world. In the recent years the city has also been chosen to host events of international importance, amongst them the  UEFA Euro 2012 Championship, United Nations Climate Change Conference 2013 or NATO Summit 2016.

Find out, below, a few facts and basic information about Warsaw.

▪ Warsaw became the capital of Poland only in the late XVI century, as its central location proved to be a major advantage over the capital at the time, the city of Krakow, located in Polish south.

▪ Warsaw, heavily bombed during WW2 and almost completely destroyed is often referred to as the Phoenix City, due to its capacity to rebuilt itself.

▪ The symbol of Warsaw is a mermaid.  The legend has it that a mermaid living in the Vistula river was freed from the fishing nets by a fisherman and in a gesture of gratitude, she offered to protect the city. There are a few monument across the city representing a mermaid holding a sword. A mermaid is also depicted in the city’s coat of arms.

▪ Warsaw’s picturesque Old Town, inscribed on UNESCO list of Cultural Heritage is in fact only around 70 years old, as it is a reconstruction of the original buildings destroyed during WW2. The restoration works were based on the paintings of Warsaw from the 17th and 18th centuries.

▪ Palace of Culture and Science, built in the 50s according to the design of soviet architects continues to be the tallest building of Poland, measuring 237 meters of height.

▪ Warsaw is said to be one of the European cities with the greatest number of skyscrapers, together with Frankfurt, London and Paris.

▪ Marie Curie, the famous scientist and the pioneers of radioactivity research, as well as the first woman ever to be awarded the Nobel Prize was born in Warsaw, as Maria Sklodowska.

▪ Amongst world-famous Poles is also Frederic Chopin. The heart of the composer is buried in the Church of the Holly Cross, in Krakowskie Przedmiescie Street. Chopin is greatly loved in Poland and during the summer, open-air, free piano concerts in Lazienki Park attract great numbers of locals and visitors alike.

▪ Warsaw is a green city. Parks take up nearly one quarter of the total city area.

▪ It is also one of the most heavily congested cities of Europe. Warsaw drivers spend, on average, 8.5 hours per month in traffic jams.

▪ One of the most tragic chapters of Warsaw history took place in the final moments of WW2. In August 44, the Polish resistance army attempted to liberate Warsaw from the Nazi occupation. The Warsaw Uprising lasted for 63 day and resulted in the death of 150 000 soldiers and civilians and nearly complete destruction of the city by the retreating Nazi forces. Visit the excellent Uprising Museum to learn more.

▪ Every year, on 1 of August, at 17h00 the city stops for a minute to honour the heroes of the Warsaw Uprising. The minute of silence is respected by most of the residents of this busy European metropolis. If you are in the city centre at that time, expect the traffic and most of the services to stop for a while.

▪ World’s first public library was open in Warsaw, in 1747. Founded by two bishop brothers, the Zaluski Library become in 1780 the National Library.

▪ There are actually more theatres in Warsaw the cinemas.

▪ Warsaw is a major educational centre of Poland. There are 16 public higher education schools, including 4 universities and 53 private schools.

▪ In an ironic twist of fate, Warsaw Stock Exchange occupies a building which in the past used to be headquarters of the Polish Communist Party

▪ Poland’s climate is far from tropical. Curiously enough, one of the city’s landmarks is an artificial, 15 meter tall palm tree standing on the De Gaulle roundabout, in the very city centre. 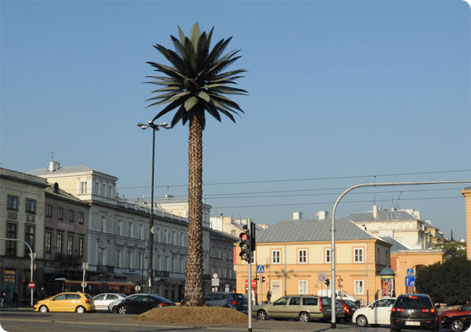 An art instalation became a part of Warsaw cityscape.

A city with charisma
While Warsaw struggles sometimes to fit into the category of beautiful city, it is for sure a charismatic one.

It’s architecture is everything but monotonous, as it reflects the city’s complicated history.  Warsaw’s cityscape is a fascinating, if somewhat random, mix of elegant and kitsch, cheap and luxurious, modern and outdated.

Here you will find dramatic gothic churches, exquisite renaissance and baroque palaces of Poland’s Golden Era between the 15th and the 17th centuries alongside the dull and raw post-communist residential quarters built as a make-shift solution to the lack of housing in the war-raided city.  The grotesque pathos of the  social realism of which the Soviet Union’s ‘gift’, the Place of Culture is the best example contrasts in Warsaw with the ultra-modern sky scrapers.

The lack of uniformity, typical to cities in major economic  transition is constantly present in Warsaw where you will be able to see luxurious shopping malls, housing some of world’s most expensive brands and small neighbourhood markets where people shop not so much because of love for local produce and eco trends, but out of the necessity, when money is too short to indulge in the retail madness of the shopping centres.

Warsaw areas and neighbourhoods
Warsaw has quite a complex administrative division, which, unfortunately, raises a lot of bureaucracy. The city is divided in 18 boroughs (dzielnica in Polish), each of which has its own local authority.  See the map of Warsaw boroughs.

The boroughs are, furthermore, divided unofficially into neighbourhoods. The city can also be divided roughly into 5 main areas:

With the exception of Wilanów, famous for its palace complex, Warsaw neighbourhoods most popular amongst tourists are found in the city centre :

Old Town (Stare Miasto)
Located in the Śródmieście borough, the Old Town is a historic core of the city and a UNESCO World Heritage site. Visit the Royal Palace, the Market place, St. John’s Cathedral, Barbican and the old city walls.

The Royal Route
Not exactly a neighbourhood, but more of a succession of historically important buildings and monuments, the Royal Route (Trakt Królewski in Polish) connects the Old Town to the Wilanów Palace, the residence of King Jan III Sobieski, in the south-eastern outskirts of Warsaw.

The must-see’s of the Royal Route include Krakowskie Przedmieście and Nowy Świat – the most representative of Warsaw streets, St. Anne, Carmelites and Holly Cross churches, the Three Crosses Square, Lazienki Park and Belveder Palace.

Do save time for a long walk in Łazienki Królewskie Park. This beautifully landscaped green area hides many surprises. Apart from extensive lawns, centuries-old trees, lakes and waterways you will be able to admire several historical buildings in scattered around what once used to be royalty’s private gardens. Łazienki Park burst is also home to a population of squirrels, peacocks and pheasants.

Palac Kultury area
Stalin’s gift to the Polish nation, the Palace of Culture in the very city centre is a mandatory stop for tourists in Warsaw. The massive structure is home to two museums, four theatres, a cinema and an observation deck located on the 30th floor.

A stone’s throw away from the Palace of Culture are other important Warsaw landmarks: the Central Railway station and Zlote Tarasy shopping mall. If you are looking for shopping opportunities, try also the slightly less glamorous department stores along Marszalkowska Avenue, opposite the Palace of Culture. During the communist times they were the capital’s prime retail area. The original, uninspired and blocky architecture is the only thing that remained from those times and instead of empty store shelves, so typical to the old era, you can find all sort of goods on sale, including luxury brands of apparel and fashion.

Praga
For many years, the districts located on the right side of the Vistula River were consider ‘the wrong part’ of the city. What contributed to that opinion was not only the distance and somewhat difficult access to the proper city centre, but also problematic nature of the northern Praga district (Praga Północ), a fairly poor, industrial area, known for high criminality rates.

As the city centre expanded and more bridges connected both sides of the river, Praga, both North and South gained a new life.

The rehabilitation of the right side of Warsaw is particularly visible as more and more of its abandoned factories are transformed into expensive loft apartments, fancy restaurants and art galleries. What once was considered a district to be avoided is being transformed into a new bohemian centre of the city, attracting artists, hipsters and alternative lifestyle.

Vistula Boulevards
Since 2013, Warsaw authorities are working on boosting the recreational potential of the Vistula riverbanks.

Although this part of the city has been used unofficially for recreational activities for years, now care is being taken to make it even more attractive. Biking, jogging, open-air yoga are some of the possibilities for the active ones. Others can settle for a stroll along the river or a moment of relaxation on the fluvial beach. This – during the day. When the sun goes down, Vistula Boulevards continue bursting with life in its numerous cafes, bars and discos.